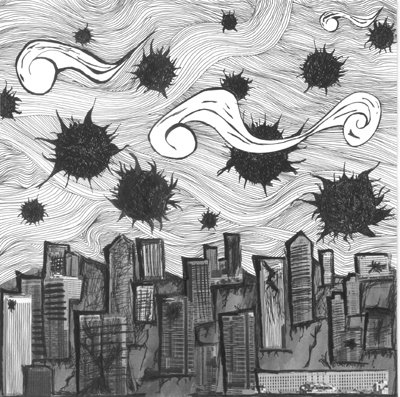 If you wanted a band to roll in and cut out all the obscene parts, the hey-heys and yeah-yeah-fun semantics, and just politely hellfire the lot in an all-consuming buffalo head rage, then the news is good: this your band; this is your album. This is your new favourite loud music-thing. And hardly a second of its yawning razor-edged feedback or disembodied vocals going ho-ho-ho into some cold dawn feels wrong, though it is, consummately, and with deference. This is a record you will probably find, on some level, offensive. That’s why it’s amazing, and that’s why I implore you: please, listen.

Take the Sky is an imperative: this, they tell us, is the “demonstration.” And it doesn’t waste breath—within seconds of opener “Atanareska”’s barge-blast of insane psyche-stun guitar, it’s pretty crystal that a couple of bands should start looking for another job. Los Llamarada have nailed it. These are their destruction tactics.

Destruction is the catchword here, for sure. If anything, Take the Sky is a sacrifice about to burst into life: poised between elements of creation and catastrophe, these Mexicans in the end cast away very little. They’ve eked out their style, know their faults—this, remember, is the group that began life hissing into a Pixies cover—and, for all their callbacks to no-wave and Wire, come across as fitful originals; game-levellers here to interpret their own personal mystery through the influence of whatever records that piqued whatever heads at whatever moment God decided an insane Los Llamarada album to be nothing less than a giant headrush. As if the hotbed of sick synths and hostile intelligence didn’t make it clear-cut, this is an album that will resolutely fuck with your head: slice through your finer feelings like the spare piece of flak it is. And then will double that experience back to you, on two slabs.

I know I’m doing a lousy job at making this album sound fun. But it is! Now having left the more lo-fi leanings of 2006’s The Exploding Now, and rescinding on the digital promise of their Very Best Moment single, Los Llamarada find themselves on the outside of their old concepts. “I Go Away” puts it clearly enough, all circus-psyche and killer elephants of bamboozled sound lassoed into these indomitable dust clouds, swilled by noise. “The Miracle Sleep” even staggers into tranquilised calypso, whilst “Ten to Dawn” co-opts sub-colonic bowel-rumbling bass for a track that’s totally (and correctly) making a point about snoozing, and how responsibility can fuck that shit up.

This is a record that calls you to engage in its crossroads. Guitars careen fearlessly into the void and each track cavorts at all times in its own special weirdness. What they’ve effectively cooked up is a spinning ceiling of noise—a series of loud improv dilemmas loosely drawn into the folds of what presumably was at one point rock. Not to call this a song-set—the idea fans will hopscotch off this mess to their next show with a litany of requests is uniquely absurd—but it’s to say that Los Llamarada, more than people might expect from a band that attacks instruments/negates sound/plus musical grammar etc, have crafted something with real, tangible determination.

Tracks like “Stressa Closer” and “Another Big Come Down” figure neatly into Fall-esque workouts, excepting the overwhelming sense you get from the mad brute force of the recording that Los Llamarada may well just be the Fall, or Pop Group, or (on the hell-for-leather “Late Great Mty Trip”) a particularly nuthouse take on Sonic Youth; they’re just that convicted. By the time they’ve scaled back their assault for the final ultimatum of “A Chance to Become Transparent” it’s hard not to hear this force as part of their DNA and/or quail at the thought that their throwback jive is one slate-grey joke.