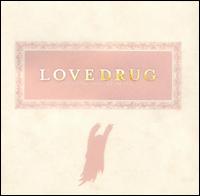 Tweet
Oh my God. Something has gone terribly wrong. A band calls themselves "Lovedrug," names their album Pretend You're Alive and employs a pinkish---rosé, really---color scheme, and actually takes themselves dead-seriously. No tongue-in-cheek at all? No wry wit? No piercing anti-love observations? Fucking hell.

So let's list the pink flags right off the bat---Pretend feels like it's a double album of schizophrenic melodrama-queen arena rock, though it's less than an hour long. There's not an ounce of the sardonic flair to them; they're as subtle as a jackhammer-wielding elephant. The production is so slick, man, you could moonwalk on it. And, the lyrics, well, they're kind of emo, buddy. So if you're one of those sensitive types who loves to rock hard about love (and not like the Darkness do---I mean, rock seriously hard about love), but have that piano-ballad tendency in you, then step right up and get ready to choke with emotion.

It seems that the music public has outgrown its taste for mellow brit-pop rockers---tired of the sniveling prettiness of bands like Coldplay, Travis, and hosts of other Echo and the Bunnymen mimickers, gusto and conviction and overdriven power-chords are the orders of the day. You know, à la Muse, The Music, et al. Not to be outdone by their peers at bombastic, baroque power pain-rock, Lovedrug are here to awe you with their power and lyrical ambiguity.

It's an effort whose attempted power is dulled by its predictable, clumsy mix of silly ballads and full-force gargantuan rockers. The band feels a need to be sensitive as well as obliquely sinister, but it's when their songs achieve the latter effect that they really hit the bullseye. "In Red," a woefully misrepresentative opener, is tight and insidious, leading off with a seductive, sinuous bassline hook and airy guitar embellishments. Joas Miller's kit-work is here as creative as that of Interpol's Sam Fogarino, using well-timed cymbal rhythm patters and contrasting bass-drum kicks (regrettably, he will be neither as clever or restrained again on the album). Even the band's lyrics are at their early apex, employing striking, esoteric imagery: "On a beach we're dressed in red / On a beach we're dressed red." Nor does the band really give themselves away with "Blackout," which starts off with some rhythmic variation in 6/8 time, even if the song's choruses are less remarkable 4/4 power chord driven bursts. The bass work remains relatively remarkable, and the band's hooks sink in with some gravity. The axe-work is still of the same eerie ethereal quality, and the lyrics---psychologically complex dissociative lines where the narrator sees his violent Hyde personality in the third person---are uncommonly affecting.

But "Spiders," the first awkward melange of soft emotion and mid-tempo aggression, does begin to finally unveil Lovedrug's true colors. Beginning with a cloying, "I'm sensitive" simple acoustic lead, which transitions into a hook-less verse, the band's initial sinister underpinnings fall away. What's left is adequate instrumentation with a gripping vocal melody, but no memorable hooks to speak of. "Rocknroll" delays the inevitable with a triptych of smart hooks and a brilliantly catchy chorus. The major-key melodies are nicely undercut by some astute lyrics ("Here's to sickle swinging fun"), and it's a second early highlight in the band's pocket. But "Pretend You're Alive" absolutely kills "Rocknroll"'s considerable momentum, bogging it down in a muck of stale piano lines and tepid lyrics about "climbing up those trees and breaking all your knees," and "angels" and "beautiful things."

"Pandamoranda" is then utterly jarring in its relentless, over-produced chords and overbearing howling, even if it boasts a decent hook. The band yanks its feet out of its emotional bog, but starts to stumble rather than regain its balance, and a final awkward rhythm change later, they wind up in yet another quagmire of sentimentality, in the embarassingly-titled "Down Towards the Healing." It's decently executed, but its interesting musical interludes are overwhelmed by its self-conscious atmospherics and idiotic lines like "I want to make you happy but I've fallen." It also marks the point where tightness disappears entirely from the group's arrangements. The album grows over-extended and gorges itself on more power chords and empty Blonde Redhead melancholy atmosphere from then on out. "Radiology" is a bit of saving grace, with a lecherous bass-and-guitar melodic interlude or two, but the album's second side still sinks under the weight of greater disappointment than relief.

Which is a proper shame because Lovedrug's frontloading of some pretty remarkable songs hints at the possibility of crafting a tighter, more propelling album. If they trimmed the fat and a good quarter of an hour from their over-indulgent second side, they'd be a good mile or so ahead of groups like Muse and other melodramatic emo-grunge rehashers. As it stands, they are still a few steps ahead - but when fickle public desire leaves behind heavy baroque-rockers, they'll probably want to distance themselves a bit more from the pull of that soon-to-be-sinking ship.