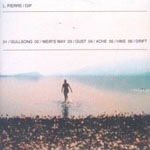 Shucks. Does Aiden Moffat no longer feel he’s the lucky one in the middle? Whether that’s true or not, in name L. Pierre is no longer lucky, or at least the “lucky” is now cloaked in ambiguity (or referencing L. Voag, perhaps?). Or it could just be a punctuation-based take on poetic enjambment, and we can fill in the blanks with all sorts of words that the “l” may stand for: lush, licentious, luminous, leafy, lonely, lazery, landocalrissiariffic. I don’t know. I also know I’ve heard like maybe three Arab Strap songs in passing ever. This review is brought to you by my letter “l”: lacking knowledge.

Of course, L. Pierre bears no resemblance to mid-nineties UK folk, so Moffat’s other bag probably doesn’t contain a special key; this is Jan Jelinek-style collage-based ambience. Unless he’s carrying some of the dusky sand from his other outfit. The beach is a big metaphor here, referenced in both the song titles and on the cover. Here’s your beach bum story: staring at the sky, staring at the sea, feeling the wind, climbing a hill, hiking back down, and standing in the surf. Also, there might be a little bit of ageing and meaning there, depending on how you interpret “acme” and “drift.” And that big sunset on the cover. Hey! Maybe that’s why we truncated the “lucky.” Maybe Moffatt just doesn’t feel that L. Pierre-as-man-between-surf-and-turf is as lucky as man on man. On man.

Musically, the treat is in the moments. The wonderful flute line that galvanizes the gorgeous, meandering sighs of “Weir’s Way” is probably the best example, and the track shows how Moffatt likes to keep his instruments panned specifically so that their textures remain separate. That vague synth that hovers at 11:00 is actually the sound that pushes the track along. Moffatt also has a good touch with keys and chords, allowing the introduction of new sounds to lead the track in different directions, rather than pushing at it from the outside. “Gullsong,” even though the basic sound is far more cacophonous, works in much the same way; the horns and voices weave around one another like the waves and the gulls that fly above, but Moffatt allows that shifting sensation to develop organically. Cacophony by chance, not by force—it’s a very nice effect.

“Gust” plays with voice samples almost exclusively; some bright synth strings enter towards the end, but most of the song is whispered coos and breath mapping against one another in all sorts of intricate patterns. “Acme” plays the same game with piano and string samples, and while some stray guitar bits putter in the background, Moffatt’s real success here is the relationship between his cello lead and a repetitive ensemble passage. “Drift” is far more scattered, allowing brief snippets and non-propulsive lines to follow one another into space. It’s nothing revolutionary, since it sort of sounds like an orchestra tune-up in slow motion, but it’s the most straightforward take on minimalism on the album, and very pretty.

“Hike” is the only track I’m not so keen on. Points for trying, and points for having the gall to stick this romantic barrage of violin nonsense onto an incredibly solemn album, but the ludicrous drums sound awkward and out of place. Or maybe it’s the other way around—points for the drums, but the pomp is awkward. Or the banjo is. Whatever the case, the whole package is just too much, especially when the track itself is nothing special. Or maybe this track is the Lucky Pierre!

When people inevitably call this music “cinematic,” what they mean is that it sounds like music that should be played over the climactic scenes of movies, rather than music that itself tells a coherent narrative. It’s too grounded in minimalism to hit the kinds of expressionism mastered by Franco Battiato, Igor Wahkevitch, or John Zorn. Instead we get wonderful impressions, wild voyages through a simple moment of clarity that is then muddied and filtered, like trying to remember the exact feeling later. The result is an incredibly pretty album with depth and scope, and even if the six tracks all explore the same colors of sunset, there’s a reason that’s such a powerful image in the first place, right?