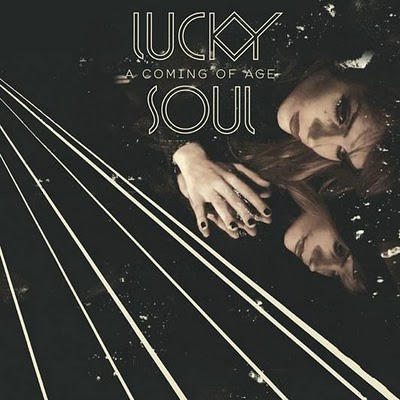 A Coming of Age

Will the album as a format just go ahead and die already? We’ve got iPods, iTunes, iLegal downloads, and reduced listener attention spans all supposedly slaying it, yet in the pop/rock/indie world the album remains the enduringly necessary artistic statement. I’m obviously being a bit of a dick with that opening, and for many if not most indie-pop/-rock bands 30-60 minutes may still be the most sensible portion of music for them to make every couple of years. For some artists like Lucky Soul, however, the album is a frustratingly inappropriate box that they seem intent on forcing themselves into. Stunning in single-song serving, Lucky Soul are a bit tedious at album length, and the whole experience makes me wish you could be a real-life, serious band with a label and tours and everything without having to release one of these bloated, filler-filled manatees every two or three years just to seem like you have a pulse. Call me an iPad-loving, quick trigger youth with no attention span—or a ’60s-romanticizing fogey—if you will, but I genuinely wish the era of the legitimate, respected singles artist would arrive and liberate a band like Lucky Soul from the chore of producing inferior variations on a sound perfected in their very best songs.

How strange that a band I quite like could inspire such a polemical gush. On A Coming Of Age‘s best tracks Lucky Soul build on the unique pop sound of The Great Unwanted (2007) singles “Add Your Light To Mine, Baby” and “One Kiss Don’t Make A Summer,” which established the band as the glossiest, most dazzlingly polished of the UK indie pop crowd. Sounding like a post-Fold Your Hands (2000) Belle & Sebastian with the leftover quirkiness traded for even more arena-pop sheen, Lucky Soul on “Add Your Light” bounce from horn hits and shuffle beats to staccato organ and chiming guitars with the ease and cool of a northern soul Frank Sinatra. Syrupy strings make “One Kiss” a torch song sped up to an summer anthem pace. Shades of disco and Motown are one thing that keeps the band from being twee, but the main factor is how far Lucky Soul are from bedroom pop. More than any of their compatriots on Elefant Records, or any other label for that matter, Lucky Soul offer a gloriously massive studio sound. Their defining achievement is crafting a unblemished and grandiose Wall of Sound for the digital age, a refreshingly ambitious take on something too often relegated to tinkling acoustic guitars and tiny, whispy voices.

Album opener “Woah Billy!” extends these strengths, filling the stereo field with harmonies, handclaps, lazer noises, and fuzzed-out riffs. It jumps out strong and hits the chorus almost immediately, leaving the listener in no doubt that this will be another hook and fun-filled Lucky Soul record. First single “White Russian Doll” amps up the energy level with a swift backbeat and lead singer Ali Howard’s saccharine coo floating here and there with the greatest of ease. The opening triad is rounded out with “Up in Flames,” a snare-on-all-four-beats Motown thriller of the dancing embarrassingly alone in your bedroom variety. All three songs are bright and gripping, evoking several immediate influences without retreading ground and can easily be counted among the best indie-pop of the year.

Almost immediately with “Love 3” things start to go awry. Howard sings an awkward opening—“My darling come beside me / her sister needs a brother / I got love tattooed across one hand and more love on the other”—to a somewhat flat soul number. “Upon Hilly Fields” is a country ballad made schmaltz by Lucky Soul’s glossy production aesthetic. The album’s second ballad, “Warm Water,” is a bit of a chore as little happens to enliven the drawn-out piano and string chords that underpin Howard’s tepid vocal. In “Southern Melancholy” and “Could It Be I Don’t Belong Anywhere” the triplet metre drags the songs into genre-exercise territory, where the band seems more intent on recreating their influences than updating them.

There are some ups mixed in with the downs, usually when the band (as on “That’s When Trouble Begins”) sticks to its wheelhouse of earnest, propulsive pop. But that’s the thing: every variation, every step away from the band’s winning formula is a step in the wrong direction. All the best that Lucky Soul has to offer—and it’s quite a package—is contained in the album’s first three songs, and every attempt to do something else fails either outright or just by comparison.

How different things would be if Lucky Soul could be a legitimate singles band. Every few months they’d release one brilliant piece of contemporary pop, blow everyone out of the water, and then retreat back to the lab to cook up their next creation. If A Coming Of Age were an EP containing the three opening tracks it would be hailed as impressive but obviously a tide-you-over, a sign that the band were still alive without having fully returned. It would imply that we’d soon see a real statement, a truly serious release worthy of distribution, publicity, criticism, and a tour. Sadly the indie-pop single or EP—formats in which Lucky Soul would truly shine—is always partial, leftover, or anticipatory, and thus those artists capable of short bursts of perfect pop (and not much else) will always be found lacking. So, again, call me a dick or whatever, but: here’s to a future in which 30-60 minutes, every two years or so, ceases to have such a profound grip on the pop imagination, and a band like Lucky Soul can find enduring respect in the format that suits them best.