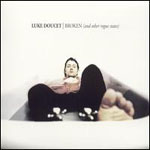 Broken (and Other Rogue States)

Luke Doucet’s got all the trappings of a new Canadian pop icon in the making. He’s got the connections (Sarah McLachlan tops this list, but to name a few others, he’s worked with Chantal Kreviazuk, Danny Michel, and Oh Susanna), he’s got the swagger, he’s even got a French last name. He’s not too hard on the eyes either, which never hurts. In the video for “Broken One,” a languid camera follows Doucet around the house and frames his blond-locked babyface in various expressions of brooding that try to convince us that he is the embodiment of the song’s title. Attempting to portray the claustrophobia of a relationship gone bad, Doucet strums through the hallway, croons on an unmade bed, and wails from the bathtub. Broken (and Other Rogue States) is a break-up album. And the video for the album’s first single is effective--I do feel a little claustrophobic.

Doucet released his first solo album, Aloha, Manitoba in 2001, and his second, Outlaw, in 2004. Before that, he backed Sarah McLachlan (on tours, and on three of her albums) and fronted the Vancouver band Veal (who, since 1996, have put out four albums, the most recent being 2003’s The Embattled Hearts). On top of all this, Doucet’s discovered a new passion recently: producing. In the past few years, he’s produced both of fellow Six Shooter signee N.Q. Arbuckle’s records, one of Captain Tractor’s, and Melissa McClelland’s (his fiance, incidentally) Stranded in Suburbia.

Broken (and Other Rogue States) opens promisingly with the twangy, tightly-produced “Brother.” It’s dark and jangly and features some of the album’s best-delivered lyrics: “Brother oh Brother / Will I see you again? / When I left you on Walnut Street / You were a wanted man.” Doucet’s snappy, playful vocal style suits the song well and the smouldering, suspended-on-the-edge-of-distorting guitars lend it an air of back-alley mystery. “Broken One,” the album’s well-chosen first single, is a concise pop tour de force. Melissa McClelland’s harmonies push the song, which features a simple, one day you’ll see type message, into a realm at once sardonic and profound: “One day you’re gonna miss me / One day you’re gonna wake up cold / Then you’ll wish that you could kiss me / When you’re old and alone.”

Unfortunately, Doucet might have been best to let “Broken One” carry the weight the broken-hearted theme, and have moved on from there. None of the other tracks, as acoustically various as they are -- the mariacchi leanings on “Emily, Please,” the show-tuney bounciness of “Free,” the rollicking slide country of “Keep Her Away From Me”--pack the same succinct punch. It’s obvious that Doucet is self-conscious about releasing a “break-up album”; he tries to maintain a sense of humour while he confesses the secrets of his stomped-on heart, but for the most part, the tone is off. An example of this is the pained repetition of the lyrics “I got a broken heart” on “It’s Not The Liquor I Miss” after the bizarre and whiny -"little red wagon’s got a broken wheel”--bridge. I have no idea what Doucet was thinking here, or on “Vladivostock,” which, to be honest is a little catchy, but sounds like a Smash Mouth rip-off.

In fact, many of these songs, especially “One Too Many” and “It’s not the Liquor I Miss” (notice another theme here?), sound almost as if, by the time Doucet got around to recording them, his heart had mended and packed its bags for more chipper shores. “Wallow” is almost an exception, and shows off Doucet’s acoustic guitar-picking skills, but the delivery of the self-mocking lyrics “this is a martyr’s scar” work against the song’s earnest attempt at sincerity.

For all my qualms, Broken (and Other Rogue States) is the work of a talented and trail-blazing singer-songwriter. When Doucet follows up on the promise of the persona-driven “Brother,” I’ll be back for another round.