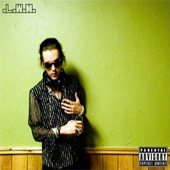 Is it baiting some sort of indie-hip cult following for a producer to kick off their debut record with the narration from Lars Von Trier’s ’91 flick Europa (and that can’t be just some coincidental chronological reference to MondreM.A.N.‘s Dope Since ’91 mixtape, right)? Is it further baiting to make that narration a through-line for your record along with what sounds like Scandinavian opera? If it is, though, it’s bound to ensure nothing more than cult status; despite loving a lot of the record, nearly half the Glow staff bemoans the interstitial material on The Tape Hiss Hooligan as “a fucking slog.” I don’t get it, though. Great rap records often have this kind of stuff; why make a stand against it now when that stuff equals moody strings (that inform subsequent songs’ chord progressions) and Max Von Sydow saying cool shit?

But back specifically to that intro (which, yes, is two-and-a-half minutes long): L.W.H. tests our patience a bit, even with the Main Attrakionz guys (quite obviously stoned) hollering in the background, but even as this is a Green Ova Chapter it’s primarily his album, L.W. Hodge’s. It bears his name, after all. And if you do any research on this L.W. Hodge you see that dude is both producer and filmmaker—and a man of impeccable taste. So he’s putting his stamp on this record, setting up the atmospheric and thematic stitching by which he can bring cohesion to throwing a variety of beats at an arc of rappers that starts off heavy on Western Tink and Shady Blaze and ends up focusing on Main Attrakionz. And, in the case of the intro, the wait is worth the pay-off, the music swelling as Von Sydow finishes his slow countdown to hypnotism and saying “you are listening to the noise of rain” before cutting directly, perfectly, into the opening tribunal synth chords of “Bobblehead.” For the intro has established that the listener is about to experience some mind-altering shit and, immediately, L.W.H. follows through with the woozy synth phases on “Bobblehead” that trip over heavy bass thuds, trying to find their footing on the kick-hat drums that become kick-snare then kick-snare-clap and then revert back.

Really, there are two types of production on Tape Hiss Hooligan. On one hand L.W.H. takes a spare assortment of sonic components and treats each with respect, giving everything forcefulness by way of careful timing and emphasizing every sound’s character. The most obvious (perhaps even glaring) example here is the piano ‘n drums boom-bap of “Oakland State of Mind,” the instrumentation straightforward and tasteful with just a bit of bass and a whisper of woodwinds to round out the mix. On the other hand L.W.H. compromises every sound for the good of the greater whole. This is the righteous maelstrom M.O. that makes up “Bobblehead,” “Spinning 87,” “All In Your Hands,” “Eternal Mono,” and monolithic highlight “Bitin’ and Shakin’,” a single that smudges industrial synth runs and deft percussive programming together in an impressionistic blur that gives off an enormous aura of velocity and churning melody. It’s a beat that boils its rappers down to their purest forms: Western Tink is all thought, MondreM.A.N. all business, and Shady Blaze all blistering hooks.

Whichever the dressing, the body of most of these tracks remains the same: simple, gorgeous chord progressions. In fact, there’s a contrast built into Tape Hiss Hooligan between the first half’s “Just A Thought,” a beat with four fuzzed-out chords that are joined at certain moments by four higher chords for flitting harmonic richness, and then the way that gets clarified and reduced in the record’s second half to the four-chord, A-A-B piano part of “Mondo Bizness,” a beat that’s also basically a looping rendition of the beginning to Talk Talk’s “Inheritance” (which: OMG, TALK TALK RAP. FUCK, YES). These two beats then also serve as a great parallel between Western Tink’s philosophizing on striving to thrive vs. striving just to survive and MondreM.A.N. laying out his business plan in detail.

L.W.H. actually fills The Tape Hiss Hooligan with these sorts of subtle connections and is constantly turning his work on its head: to look back at its precedents, to find new directions, to create a sense of over-arching, elaborate structure that both maintains and expands his methods. “Mondo Bizness” is the first song after “A Place Far Away,” a track interlude which contains more Europa dialogue that perhaps unconsciously speaks to L.W.H. displacing himself in an attempt to embrace and even create new culture. We’re talking about an avant-inclined white dude aligning himself with a bunch of weed rappers and figuring out what that means for his music. Starting with “Mondo Bizness,” the record’s final section shows L.W.H. flipping his own script, cleaning up his sound (apart from the gleaming, tidal scuzz of closer “Eternal Mono”) and diversifying his palette without straying too far from his established techniques. It’s that first production style with some extra surprises, like the hand-drums, chunky slap-bass, and faux-horn cameo that are smartly implemented on “Surround Pound.”

I don’t know what’s more amazing, then: the way L.W.H. manages to define and redefine his aesthetic on his debut, or the way the various Green Ova rappers cohere so strongly around that multi-faceted style. It makes The Tape Hiss Hooligan somewhat unique; the last great rap producer’s album that I can think of where a non-rapping producer is the named artist, recognized as the central creative force, is J Dilla’s Donuts (2006)...a record with no rapping at all. No, there’s something intangible that separates The Tape Hiss Hooligan from the other lackluster producer projects out there; this is a record that reeks of belief. Belief in itself, in the sounds it pushes, in the collective it backs, in high art and low art, God and rap. Here Squadda B and Max Von Sydow are rendered equals. Here fat Von Trier lifts are the norm and rappers quote Scriptures wholesale (“Just a Thought”) amidst the typical Green Ova steez of odes to weed and scraping by. And somehow the dichotomy is made something more than that, something incredibly whole. L.W.H. has stated on Twitter that Green Ova are the only dudes that would fuck with his music; this alone is a tribute to the collective’s power in their unassuming openness combined with forward drive. By the time Squadda concludes his verse on the (so) dreamy single “All In Your Hands” with “I ain’t from the world, nigga, I was put here,” and the resplendent synth cascades and garbled sample begin their fade into oblivion, The Tape Hiss Hooligan has 100% achieved the tone of absolute yet quiet authority that it’s going for, the carriage of beats bearing beatitudes. Young wisdom never sounded so right.

Because, let me tell you, I get cold chills when I listen to this record. And it’s because I can hear the mind and heart of a dude I relate to—a dude who spins Slint’s Spiderland (1991) and calls Dreyer his favorite director—while he’s making beats for a sort of new and improved Quannum (more down-to-earth and yet more high). In fact, I think L.W.H. engages art in a way very similar to myself; I listen to “On My Shit” and hear a raw contemporary of “Niggas in Paris” with love practically oozing out of it for nascent Timbaland, the Neptunes at their Clipsiest, a very “tronic” Black Milk—that is, “On My Shit” is totally on my shit. Indeed, I think L.W.H. and I get cold chills from pretty much the same stuff; like, he probably shivers a little at the part on his own record where the screwed chop of end-rhyme “come creepin’ on home” hits amidst the whirling sample euphoria of “Spinning 87.” To borrow a line from the other recent Green Ova drop this year, 808 & Dark Grapes II by Main Attrakionz: “Doubting myself cuz I don’t think the world can relate / To my surprise everyone does, so have faith” (Squadda B on “Take 1”). Verily, I for one believe in The Tape Hiss Hooligan. Now, let’s get our cult on.