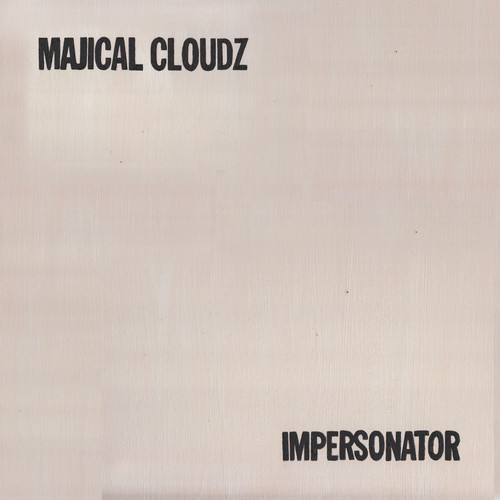 A couple of weeks ago I wrote about Jenny Hval’s remarkable new album, Innocence Is Kinky, arguing that the clarity and sincerity of her lyrics were the key to her importance as an experimental artist. Hval writes about themes like power and body politics in a way that acknowledges that these are bigger issues than the self-exploration in which so many artists endlessly dabble. In other words, her work has an agenda. She uses music to engage to an end, to connect rather than to silo off or create refuges of exclusivity and cool. In so doing, she recovers, a little, the concept of the experimental as a genre with a purpose.

Majical Cloudz’s Impersonator, in its best moments, rivals Hval’s commitment to clear-eyed, unapologetic probity. It can be startling when its sentiment cuts like a hot knife through the butter of whatever celebrity worship we’re engaged in today (see West, Kanye). “Someone died / Gunshot / Right outside / Your father / He is dead,” it goes. That song, called “Childhood’s End,” almost presages a kind of molting from the childlike singer-songwriter skin. The child, and the father, is dead, and with them their egos; we’re left only with the idea, that burning, thermal core at the center of this work.

There’s a central and important paradox at work here, something that elevates the record above what might otherwise be emo-aspirations of gushy earnestness. Singer Devon Welsh makes himself the first target of an incisive analysis. Take the lilting title track, on which he sings, “See how I’m faking my side of it / I’m a liar, I say I make music,” on which he confesses that “I want to feel like somebody’s darling,” and then, “I told you that I’ve been writing / This song is proof that I’m trying.” It’s a maudlin, actorly performance of Arab Strap-ian proportions, less confessional than an acknowledgement of the absurdity and irreconcilability of the human mess and the artistic endeavor. The album opens with a song about the stupidity of making albums, and, with that act of hollowing out one’s own power out of the way, Majical Cloudz—Welsh and producer Matthew Otto—go on to attempt to make an honest album anyway. It’s either absurd, brave, or probably both. It’s also very self-aware.

2013’s most brutally honest album comes from an unlikely place; reading Pitchfork’s interview with Welsh finds him citing Alicia Keys, Smashing Pumpkins, Radiohead, and Limp Bizkit as the blips on his musical radar. It’s enough to make one wonder: if you were to peel away at the layers of our preferences, our tendencies, and our biases—all of our embarrassing little allegiances—are we all as capable of producing something as sincere as Impersonator? There’s empowerment in the question.

The album does stutter from time to time, with some songs repeating one idea without elaboration, like “This Is Magic” and “Silver Rings,” but the simplicity and sparseness of the arrangements remain, for the most part, the album’s principle strength. “Childhood’s End,” “Turns Turns Turns,” “I Do Sing For You,” and of course that tragically elegant ode to both love and death, “Bugs Don’t Buzz,” are some of the most beautiful songs you’ll hear all year. Each builds subtly around the central coda of Welsh’s singing—both his straightforward lyricism, and the rich texture of his voice. Almost nothing is allowed to get in the way of those words.

I admit to being suspicious of my role in all of this, because what I’m privileging above all else is my sense of Welsh’s authenticity. A couple of issues of Harper’s ago, Thomas Frank cited Mihaly Csikszentmihalyi, saying, “far from being an act of individual inspiration, what we call creativity is simply an expression of professional consensus. Using Vincent van Gogh as an example, the author declares that the artist’s ‘creativity came into being when a sufficient number of art experts felt that his paintings had something important to contribute to the domain of art.’ Innovation, that is, exists only when the correctly credentialed hivemind agrees that it does […] what determines ‘creativity,’ in other words, is the very faction it’s supposedly rebelling against: established expertise.”

Can the same thing not also be said for authenticity, that nebulous factor that cannot be assessed without some bias, some speculation, some unsatisfying metrics applied? It’s true that the cornerstone of my enjoyment of this album, several listens through, is my perception that its embarrassing honesty is sincere, is not some contrived attempt to convince me of its meaningfulness. While I remain suspicious of my role as critic in this discussion, it’s important that Welsh says right up front that he is engaging, and masterfully so, in the deception of artful expression—which is cursed from the moment it leaves Welsh’s control and reaches our ears, to become something else entirely. That acknowledgement is what makes the rest of this exercise utterly convincing.

I admire above all that Welsh seems to both let go of control, to cede it willingly to his partner in this endeavor, which is his audience, and that despite that cessation he continues to express himself with candor and unapologetic urgency. Make no mistake—it’s important that Impersonator’s first act is to undermine the artist’s own power, to give up that which many performers spend entire careers seeking out or developing. While the critical community is currently at the center of Yeezus’s masturbatory maelstrom of anger and disgust, I can only describe Impersonator in a word: generous. And as is the case with any act of generosity, I feel the only appropriate response is to say thanks.