Other Records by Man Man 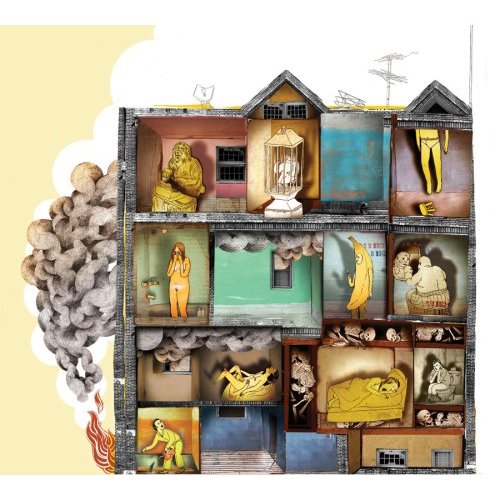 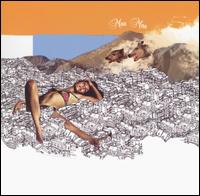 Man In a Blue Turban With a Face

Take the initial moments of “The Fog or China,” in which a robot laments its eventual obsolescence, its watery loops shorting into a clapped triplet: something wholly electronic collapsing in the face of something simply organic. Or wait through the six-plus minutes of waves sampled at the end of The Man in a Blue Turban with a Face; you’ll hear, perhaps from a balcony or farther down the beach, a man screaming, and then laughing, and then screaming again, with more and more ambiguity between pleasure and pain. This kind of extreme dichotomy doesn’t define Man Man’s sound, but it goes a long way in characterizing the logic of the band’s work. In “I, Manface,” the sentiment is bemoaned, “I was raised on wolf’s milk, / Though seems I sleep like a lamb.”

Because Man Man raises a skyscraper fix-me-up, sweating and cementing with the sweetest elegance. Could such a building be as exciting to tear down? It could have two lobbies: more people and more rubble. Three Olympic-sized swimming pools. Yeah! More semi-nudity and water like waves of death. So, when Man in a Blue Turban‘s songs are massed from excessive bits and pieces, it is exhilarating to watch them taken apart. Sometimes it’s impossible to tell the difference between assemblage and demolition, but this is Man Man’s talent.

Even better, amidst the bells and whistles and accordions, Man Man’s debut LP is thoroughly solid. “Against the Peruvian Monster” begins with singer Honus Honus’s almost familiar howl (somewhere between Frog Eyes' Carey Mercer and Nick Cave) screeching the track’s title before an immediately likable choir of kindergarteners la-la an immediately likable melody. Set along a violin that drops out at its tastiest and moogs and bass that establish the staccato low end of much of the album, the mess hugs its cacophony. It could be a death sentence, but Man Man controls its noise with what could only be a beleaguered restraint.

This becomes more obvious in “10lb. Moustache,” a smarmy waltz of aluminum percussion and washed-out saxophone. After the assault of “Peruvian Monster,” Honus tames his “voice” and drummer Tiberius Lyn doesn’t nail his trapkit with such spitfire. Good thing, because out of the fray, squirming female vocals hang lovely in the air before a rushed conclusion that could only hold weight in such emptied space. About now, one starts to hear this baby’s engine purr like a werekitten.

By the time “Zebra” blows a gasket half-way, plinking and winking to life for more voices and a mournfully extended trumpet, two things seem to be set: first, Man Man never really stray from a basic blueprint of piano, hollow percussion, a string or brass instrument of some sort, and an exponentially higher vocal than Honus’s; and B, although the songs don’t necessarily sound “the same,” a subliminal theme runs from Monster to Heartbreak, possibly the prepubescent melody that reappears in “Gold Teeth,” or maybe something more subtle, a tone in the “forethroat” or a general predilection for fantastic beasts and their troubled offspring. Regardless, a band that has its Thumb at the back of a lighter, poised at the fuse, should not be able to develop something so simultaneously disparate and cohesive. Yes, it is truly dynamite!

For me, then, in its befuddling illogic, TMIABTWAF has become something of a soundtrack for things that shouldn’t be done. “I, Manface,” with the haunting and hilarious line, “And I went to sleep, the shell of a man. / Woke up the same so I slept in again,” travels from Dixieland to Brooklyn, muted trumpets, soul singers, and all the throttled gurgles a tired lead singer can muster shuffled between the wheels of the touring van. The song should be played while drinking a glass of milk before bed, continued into the ferocious lactose dreams of night.

“Man Who Make You Sick” conniptions from chamber noir to Burt Bacharach sway to cheap and compelling Oriental rip offs, eschewing the same kind of shame one would want to drop before clotheslining a trail of nuns running from their burning convent. “Gold Teeth,” contender for best cut with the simplest and juiciest chorus on the album, could be the perfect accompaniment for a trip to the library in which the first paragraph of every copy of A Tale of Two Cities has the potential to be markered over. And, oh, there would be much giggling.

Much of this fantastic album is exhausting, mostly because constantly shifting layers of sound reveal eccentricities as often as I use exclamation marks. But in all of its blowing up and fiery implosions, The Man in a Blue Turban with a Face stays satisfyingly accessible. At the least, “heart of hearts” has never been so applicable.