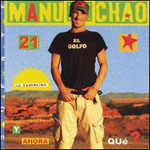 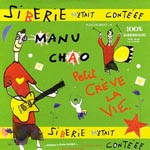 It’s occasionally tricky to fully explain Manu Chao. What’s the appeal of a Spanish ex-punk rocker who lives in Paris, worships at the altar of Bob Marley and sings glorified children’s songs in five or six languages? It’s not music that’s immediately accessible, but given a decent shot it holds a deceptively strong appeal.

After the dissolution of Mano Negra in 1995, and over the course of his two solo albums, 1998’s Clandestino and 2000’s Proxima Estacion: Esperanza, Chao built his own little genre out of carefully picked samples (often either political or mass transit-related), simple guitar chords, and some of the strangest accompaniments in folk music. His lyrics are often childish in their simplicity, but his appeal seems to stem, at least in part, from the naivety and optimistic outlook that they reflect, even if they often get at darker and more troubling realities at play (see: “Welcome to Tijuana,” “Desaparecido,” and “Por el Suelo”).

When we last heard Manu Chao, he made it awfully unclear where he'd go next. Proxima Estacion was, although an excellent album in its own right, not a major step forward from Clandestino. If anything, it showed Chao becoming more enveloped in his own bohemian reality and more removed from the political and social situations that made Clandestino so compelling. The 2002 live album was a fantastic testament to a live show that rarely ever stops north of the Rio Grande, but didn’t show any particular new direction.

So here it is, five years since his last proper studio album, and Manu Chao is testing the waters. Siberie M’etait Contee is certainly a new direction; whether it’s one that he’s planning on expanding on, and whether that would be a good thing, are still unclear.

The album serves as the accompaniment to the book of the same name, a project of Manu Chao and the illustrator Wozniak. The lyrics of the album and the text of the book roughly correspond, and what emerges, even with my nonexistent grasp of French, is a sort of love song to Paris, which eventually delves into French colonization, global politics, and, as with all Chao projects, love. A limited number of the books were printed, and the only way to get one of these albums is to track down a copy of the book (it’s getting easier, but can still be tricky).

As for the album, it really is Chao heading in a new direction. The album is overwhelmingly French, both in language and in terms of content and musical choices. Gone is much of the Latin American and Caribbean music (including the raggae) that informed his last albums, and also gone are the samples. Coming off the brilliant montage of bits and pieces that made up the core of Proxima Estacion, Siberie is somewhat shocking in it’s straightforward approach.

It’s also a rather daunting album to listen to. At 23 songs and 72 minutes it’s a good deal longer than any of Chao’s previous material, and the instrumental choices and generally monolingual approach leads to a certain degree of homogeneity. On the other albums songs ran together, but then Chao would break into another language or introduce an entirely unique melodic variation. Even when he famously used the same beat for two songs, “Bongo Bong” (from Clandestino) and “Homens” (from Proxima Estacion), the two turned out differently enough that it hardly hurt him. The same doesn’t apply here as consistently.

This is not to say that there aren’t songs with more than enough flair. “Helno Est Mort” starts well and turns phenomenal with the addition of a strong backing vocal and a great muted trumpet line that sounds like it was taken out of some Parisian jazz club circa 1937. “100,000 Remords” has that quietly plaintive feel that Chao seems so easily capable of, while the lovely “Si Loin de Toi…jet te Joue” revels in its simplicity and beautiful melody. “Siberie Fleuve Amour” is the most recognizable song here, incorporating percussive elements that Chao is familiar with while layering in a xylophone line that skews the entire song perfectly. “Te Souviens tu…” rides what sounds disarmingly like a sinister Dr. Dre beat, while the restrained “Dans mon Jardin” never quite breaks into the sort of grand chorus that you’re waiting for, but nonetheless shows Chao’s gift for building tension. Closer “…Siberie” is hauntingly beautiful, leaving Chao seeming older, wiser, and perhaps even more promising than his other projects have let on.

Still, it’s hard for me not to acknowledge that, while I do certainly enjoy this record, and enjoy it more with every listen through, that it’s probably not for the casual fan. It is a commandingly monolithic piece of music, and certainly not nearly as decipherable as Clandestino or Proxima Estacion. Given repeated close listens the musical themes become clearer and the beauty of the album reveals itself. It’s sort of a shame to watch Chao retreating even further into his own world and avoiding the spotlight he seemed poised to seize following the release of Proxima Estacion, but it’s nonetheless encouraging to see that he’s still got the creativity and drive that has defined his more than two decades of musical projects. Who knows what he’ll do to properly follow-up Proxima Estacion, and if Siberie is any guide, it could be almost anything.