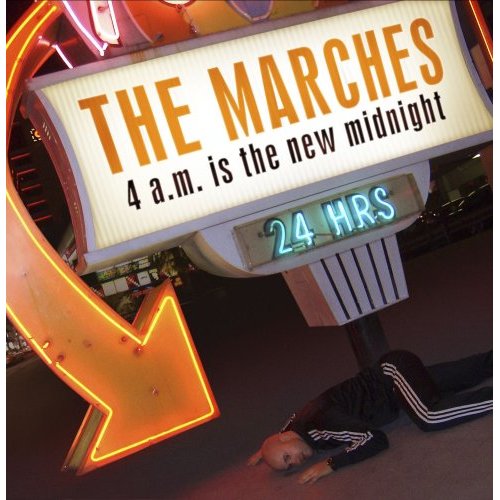 The Marches: 4 a.m. is the New Midnight 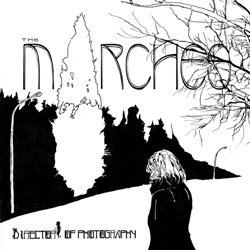 Two of the songs on the Marches’ new EP were first released via the CMG Fantasy Covers podcasts. Check it. All my disclaimers are links.

It’s thus that Director of Photography is about 50% impossible for us to pan (and the other 50% highly improbable). Is a Cokemachineglow review, then, a worthless thing? Because Cokemachineglow and the Marches share trust, are the readers inevitably excluded? The fact of the matter is that in some ways criticism can be viewed as the establishment of an intellectual or intuitive trust or mistrust between the critic and the artist and then the critic’s sharing of that trust or mistrust with the reader. So, readers, let me share some trust with you.

Marches’ maestro Richard Conti can blow some woodwind. Where his debut 4 a.m. is the New Midnight (2008) found itself roaming erratically amidst glowing L.A. nightscapes, this Director of Photography EP finds its signature in his mastery of a brazen instrument. The minor chords that were once reworked to all sorts of nightlife ends and purposes here revel in a cleaner, more streamlined production style and a rather moodier depth of emotion—a more natural habitat, I suppose, but without much loss of the previous release’s spunk in handling those types of progressions. I don’t know if Conti covering Yorke’s “Black Swan” (here smartly edited down from the incarnation he did for us) helped result in the Amnesian piano plod at the core of opener “Big City,” but hearing those two tracks back-to-back is basically the sound of an artist discovering their wheelhouse. And it’s a house that builds on the same chill-inducing evocations and humming energy of their previous high watermark, “Need Me Back” from The New Midnight. Which, of course, is all too appropriately presented here in a live version that shows, while the Marches may sound a bit more austere and reined-in this time out, they haven’t lost any of their playfulness. A bass line that once intoned now walks, the original’s magnificent drums absent for the noble purpose of letting Conti get free on that saxophone of his. And so the track doubles in length but loses none of its swing. Is this what maturation sounds like?

Never mind that the Marches are able, without compromise, to broaden their horizon on a raucous acoustic guitar-sax-matches (Fantasy) cover of Adele’s “Cold Shoulder,” one-upping the original while completely transforming it while making it clear that they can hone in on a Radiohead-lite aesthetic and yet still be something else entirely. Oh, and while once again affirming that vocalist Briana Nadeau is so many kinds of awesome, the soulful vibrato of her voice punching straight to the gut with effortless grace. If Conti has been persistently complicit in working with Cokemachineglow on covers like “Black Swan” and “Cold Shoulder” and keeping me updated on what’s going on with his band—that is to say, if Conti trusts Cokemachineglow to this point—then by favor of his trust I only ask him to keep working with Nadeau as much as possible, to keep playing his clarinets and saxophones as much as possible, to keep pushing the Marches’ focus as much as possible beyond the trappings of kitsch and anonymity into a fresh realm of post-millenial, nay, post-aughts DIY trip-hop that’s simple and resonant…but fun, too. Because, readers, I’m pretty sure that’s where this Marches shit is headed.