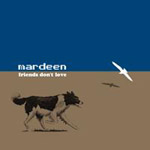 Mardeen are from Cape Breton. There's four of them, all guys --- Matt, Jody, Travis, Jon. Everything else I know about Mardeen comes from hearing their independently released debut Friends Don't Love. After just two weeks, I can share the following (read bold text for the short-hand version):

1. They're young. Not amateurishly so, but even during the album's best tracks there's a sense that this is a band figuring themselves out, not hitting some highpoint in their potential. Take "Highlight of Your Life": the vocals are kind of flat, the melody is simple without being "deceptively so," and it wanders in a weird Antics-lite direction with a weak chorus. There's a recurring flatness to several vocal tracks, a lot of repetition and an unassuming quality to their rhythm section that lacks the kind of confidence they'll need to really do something incredible with their formula. Which sounds kind of harsh, but makes all this "being young" nonsense the good news, I suppose.

2. They come on strong. "Talkin Talkin" really does come dangerously close to being annoying instead of fey and charming. "Friends Don't Love" changes gears and gets Strokes-ish mechanical, but the High Llamas/Holland-era Beach Boys-quotient goes apeshit, trading soft-rock verses with a jittery, instrumental chorus. It's hugely nostalgic on all fronts and not one of their more convincing lead vocals, but still one of the EP's better cuts.

3. It's not all good. "Highlight of Your Life" and "Street Love" (which starts out like an awesome Local Rabbits song --- check out the falsetto and lead guitar --- but then doesn't go anywhere) are the EP's only two real misses. And your ability to sit through "City Lights" will boil down down your tolerance for Ben Gibbard. It's that uncanny.

4. But most of it is. "Won't Be the Sun" struts like a more self-conscious Strokes with the melodic sweetness of "mature" folk-pop, throwing out one Guided by Voices hook after another until a monotonous two-note harmony beautifully stretches the track out. It's a much needed reassurance after "City Lights" brought them dangerously close to a conjoined Strokes/Death Cab cover band.

"Heartbeats" goes to the same Barsuk extremes as "City Lights," but this time aping everything that's not annoying about the Long Winters (admit it, When I Pretend to Fall had its moments) and plastering it with cheese and the EP's strongest vocal. The chorus is a little repetitious, but again very cleverly produced and saved by at least two memorable surrounding hooks. And this is just a self-released (for-all-intents-and-purposes) demo, for christs sake.

They're about as edgy as silicon, and the "Highlight of Your Life"/"Street Love" one-two does take a lot of momentum out of such a short debut; but this is a notable release on the strength of a handful of tracks alone --- and even they're far from the EP's sole worth. "Won't Be the Sun," "Friends Don't Love" and "Heartbeats" all stand out, but it's the way they're able to work in a Local Rabbits verse or an unexpected vocal hook during their weaker songs that makes Friends Don't Love such a promising debut.