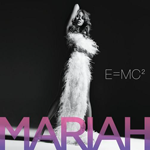 What’s the opposite of a redeeming quality? It’s not quite a tragic or fatal flaw; these imply one singular trait that brings about one’s downfall, whereas redeeming qualities can easily be plural. In the absence of a good antonym phrase, let’s call what E=MC² has “damning qualities,” and boy does it have them in spades. Many of Carey’s 18 #1 hit singles (...what?) have sublime moments, but this album can’t get a verse or a beat off the ground without stumbling on a plethora of idiotic gestures. Indeed, the story of E=MC², like so many big-star, big-budget pop albums out there, is one of great opportunity and persistent, utter failure.

Lead single “Touch My Body” is this story in miniature. It starts out harmlessly enough, and before long the R. Kelly beat underpins a pretty decent chorus come on. But hoooooly shit, this happens in the pre-chorus: “If there’s a camera up in here then it’s gon’ leave with me when I do (I do) / If there’s a camera up in here then I best not catch this flick on YouTube (YouTube) / ‘Cause if you run your mouth and brag about this secret rendezvous / I will hunt you down.” What’s even more amazing than the existence of these lyrics is the sweetness of their delivery; it gets even breathier and more fetching while she’s threatening to hunt me down. Needless to say, while this may be a realistic part of the contract negotiations involved in bedding real-life Mariah, it absolutely derails the smoothly seductive flow of the song (as, I’m sure, it does the real-life bedding). If this is some sort of attempt to be current, it is fabulously ill-conceived. If it’s a meant to be true to life, Mariah: TMI.

Fucking Danja. I wouldn’t hate on him if he wasn’t so close to being great. His beat for album opener “Migrate” is easily the closest thing to a real banger here, but it begins a cappella with Carey singing in her famous super-high range. The result is that the very first sound on the album is some sort of proof-of-concept that Carey can still sing high. Sigh: making sure we notice that you can equal your past achievements, for a moment off the top and not once again for the rest of your record, isn’t impressive. It’s a shame, too, because it squanders not only half of any goodwill I have at the beginning of this record, but it also wastes some great hooks and a show-stopping verse by T-Pain (yes, I love the vocoder). The other damning quality here is just a little detail called the central premise of the song: migrating? Seriously? The big brag here is that they move to different places, and it’s surprising how many boner premises keep popping up. “Side Effects” and “Cruise Control” both milk extremely thin, clichéd metaphors—exactly the sort that R. Kelly wields with heroic cultural acumen. “Side Effects” lathers up so many “oh!”s, “ay!”s, “woop!”s, and “yeeaaaurgggggh”s from Jeezy that he almost appears as foolish as the ten-year-old drama Carey is rehashing.

Somehow the album’s title—from Wikipedia: “(E) Emancipation (=) equals (MC) Mariah Carey (²) to the second power” (...what?)—isn’t even the worst part of this mess. It turns out that “Migrate,” “Touch My Body,” “Side Effects,” and “Cruise Control” are actually some of the record’s better songs; the remaining thirteen are mostly beauty-pageant-meets-R&B ballads too boring to excite my vitriol. Try as she might, Carey does not pull out another “We Belong Together,” though small rays of light shine through the cracks with “I’m That Chick” and “I’ll Be Lovin’ U Long Time.” Both are light, upbeat club tracks more reminiscent of Carey’s ‘90s heights (like the all-time, ass-kicking “Heartbreaker”) than current trends, and prove that, like Kylie Minogue, Carey would do better to remain true to her own sound than to flail for a desperate contemporaneity. But even the fun disco of “I’m That Chick” is too little, too late for E=MC²—an album that proves just how easy it is for a well-funded virtuoso and the world’s best hitmakers to create a steaming pile of shit.