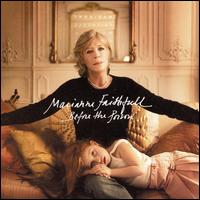 Much has been said about Marianne Faithfull’s voice. Most analyses of her sound --- focusing on the part Faithfull's voice plays in her maverick presence --- are on the money: precious and off-kilter, Faithfull's vocal scratches became the stuff of brimstone between her dual debuts, 1965’s Come My Way and Marianne Faithfull, and her “come-back,” Broken English (1979). It’s true, some of her resurgent appeal was about the voice, a new depth of dread and crackle in a Lennon cover and slipperier dance-punk, but the whole shebang was really about the cool.

What happened to Marianne’s voice? She dated Mick Jagger (who co-wrote Faithfull’s hit, “As Tears Go By,” in 1965), took on icon status more than song-writing credit, and went for the ice-cold hue of a drug habit. Not exactly cool activities in and of themselves, Marianne’s antics were busy earning her a style at that time. She wasn’t recording or writing so much as just owning, albeit in a destructive, clichéd kind of way. She began to own her beauty, her body, the music she listened to, and, in the end, her voice.

Now, Before the Poison is here, and in light of 2002’s collabo-rama Kissin’ Time, or even Strange Weather ( the 1987 Faithfull touch on American “standards") it isn’t much of a surprise. P.J. Harvey fully pens three of the ten tracks, co-loving on two more. She makes grand slides with her time, from chamber folk on "The Mystery of Love" to the yowling, sharked riff of “My Friends Have.” “Friends” becomes a figurehead of the most successful aspect of Faithfull’s now-often collaborations: over a heavy backdrop, her voice is forced to the forefront. Each of its subtle twists, turns, splits, and dips becomes a gorging event, and, yes, she owns it. So, even though Harvey’s harmonies have an octave up on Faithfull through most of the cut, Marianne steals the impact from out of Polly’s throat when the elder commits her own belabored jump.

The same goes for "Desperanto," co-written with Nick Cave: a shamble of organs, static, and Faithfull's unique chant. The noise is overpowering, especially set against an album of mellow numbers, and even the thin snare slaps punishment all over Cave and Company’s shouted chorus. But Faithfull stays reserved, commanding, wholly cool, and she wins. Then the song drags, overstays its welcome, just like another Cave song, “Crazy Love,” which is lifted from its muck by a soaring Warren Ellis violin solo. Trouble, though, doesn’t really start until “There is a Ghost,” another song with Cave, which in itself is a beautiful piece of ambience, but one that sounds more Bad Seeds than Good Faithfull. When she loses her distinguishing dominance, she sacrifices her style, and the fantasy of her world dissipates. The looming maw of Santana-friendly-collaboration-angst lowers its teeth over the fifty-eight-year-old’s head.

Damn Albarn and Jon Brion alse lend a hand in songwriting duties, with Albarn going suprisingly anti-Albarn on “Last Song” and Brion less surprisingly pro-Brion in “City of Quartz.” Brion’s biggest hang-up is fragility, and “Quartz” sounds about ripe to shudder and explode, but the tension built between a rickety conveyer belt clip and the crystalline operetta of chimes is a fascinating conclusion to Faithfull’s ostensibly brief Poison.

By my calculations, this is Marianne Faithfull’s twenty-second album. Some discrepancy can be allowed with 2001’s Stranger on Earth and the same year’s reissue of Faithless (originally 1978, right before English). Yet, throughout her glorious and gritty “permutation,” she’s come to truly embody the word, crafting a non-linear persona of fantastic love and fantastic hopelessness. She etches out a style that is as feeble as it is vicious. And she owns it, her voice only an assurance of just how cool she really is.