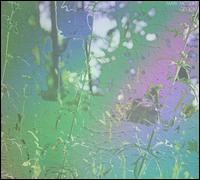 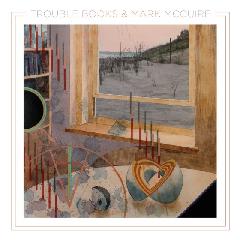 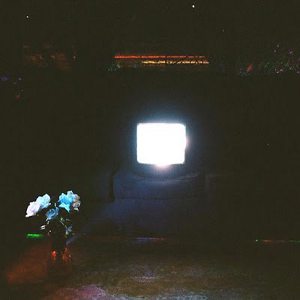 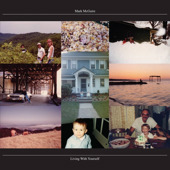 It’s strange that the difference between a group record that’s just synthesizers and guitar and a solo record that’s just guitar and synthesizers could be so perceptible. But Emeralds records churn their components in a maelstrom of synergistic ideas from different sources, different people, while Mark McGuire of Emeralds drops a solo album that sounds very much the product of one person. On “Candy Shoppe” from Emeralds’ Does It Look Like I’m Here (2010) the guitar lines and synths react to each other with a rapidity and a hunger for waves upon waves of visceral bliss that’s unlike anything McGuire can match by himself. So on the opener of Living With Yourself we have found sound recordings and a standard if intricate acoustic guitar figure, like a Books track gone laconic, which then gets gorgeously but perhaps somewhat too easily consumed by a drone. The title of this track—“The Vast Structure of Recollection”—is overly ambitious, sets us up too much for the kind of Herculean aesthetic embrace of concept that Emeralds managed to execute with “Alive in the Sea of Information,” opener for What Happened (2009). No, “The Vast Structure of Recollection” is more like a medium-sized sonic recollection that perhaps hints at a vaster structure, but even that might be pushing it. It’s an appropriate start to the record, though, establishing this solo outing as the opportunity for McGuire to get inside his own head and bring us along.

And, boy, it’s a pretty place inside that head. If I diminished the opener too much let me just emphasize: that drone is gorgeous and the guitar is not left unchanged when it’s spat out the other end, transformed into a spidery cascade of trebly picking and reverb—almost like in the move from the acoustic strumming we have a transition from McGuire, college pothead, to McGuire, Emeralds band-member. This is, maybe, the sort of linear narrative journey that McGuire hopes to take the listener on through Living With Yourself, especially if you look for a progression in the song titles and find nostalgia running up against “Clouds Rolling In” and “Brain Storm” and then the dissolution implied in “Two Different People” and “Moving Apart” before the last gasp of reminiscing in “Brothers (for Matt),” a freeze frame and montage over credits with vocal clips cueing the kind of nu-metal jam-rock McGuire must have dug in high school. That’s right, there’s drums, and they slum it up big time! I can appreciate that journey, honestly, I just wish I appreciated the individual song aesthetics more; the shorter tracks like “Around the Old Neighborhood” and “Moving Apart” do little beyond establishing their own prettiness while the better tracks fall just shy of establishing their own greatness.

“Clouds Rolling In” gets off to a fantastic start, a palpable tension in the guitar lines and in the ominous moans of synth that build and then melt into an extremely distorted guitar loop, but it all falls away too quickly and with too little pay-off. Perhaps the intended pay-off is “Brain Storm”—a stand-out centerpiece to the record, for sure—but even then the surprising power chords that break into the song’s elegant framework halfway through lose some of their force by revealing a lead progression that’s too elaborate to have much momentum or continued impact. In Emeralds you have three different members vying for space for the components they represent but also communicating in order to create new spaces for new ideas to burst forth intuitively. With McGuire, alone, everything feels painstakingly planned and set in order, in a very defined motion, and I’m afraid that in that motion’s definition there is some stagnancy.

So “Living With Yourself” is a lot like, well, living by yourself—comfortable, unchallenging, plenty of time to get introspective and think about things that once were. I realize that last bit is where McGuire tries to show a coming-of-terms on this record; however, a feeling of acceptance permeates from the very first second—with the internal conflict already resolved the end result comes off a little self-satisfied. It’s this contrast that McGuire has between himself the solo artist and himself as part of the very special Emeralds, though, that speaks volumes for the inspiring value of community, relationship, and seizing the moment and wringing it out for all its worth. Maybe it’s time for the other two Emeralds guys to move in.