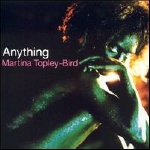 Tweet
When I discovered that Tricky first met Martina Topley-Bird when she was 15, in front of the former Wild Bunch member’s Bristol (Beth Gibbons’ old stomping ground!) home, I did some quick math; if Tricky was born in 1964, I realized, then he would have to be 26 at the time of their chance coupling. Then—keep following me here—if by 1995, that is, Tricky’s big year with the release of Maxinquaye and his tour with PJ Harvey, Martina has a child with Tricky, one can assume that there was some copulatin’ and relationshippin’ prior to '95. We’re talking Tricky as R. Kelly to Martina’s Aaliyah.

And yet, regardless of your opinion as to the affairs of a love bridged by eleven years, Martina’s presence on the genre-defining Maxinquaye crystallized the aims of trip-hop in the early nineties, pulling the gestating threads of ambient, aggressive electronica in line with a smoother caliber of soul. God, it was her voice. In the young tenure of Tricky’s teenage muse, something promised to go superbly right, despite the dichotomy between her age and the murkier shuffles of the genre’s erotic undertones. It was relatively easy to look past her youth, but already Martina seemed subsumed by her sugar daddy’s vision. Influence in Martina’s case felt too indelibly mired in the susceptibility of age, and hopes for something more mature, more thought out than what could be akin to a college freshman regurgitating Noam Chomsky still loomed ahead in solo territory.

So, the UK got Martina’s solo outing in 2003, Quixotic. Retooled, re-tracked, and finagled, this work is now in the hands of the Yankees, released in the guise of Anything through Palm Pictures. Tricky collaborations still abundant, Topley-Bird is very much comfortable in her element here, languishing in each sultry synth, chime, and layer of feedback. On first listen, for example, Anything quickly works through its own canon of influence, dredging up the persistent heaviness of Portishead or loopily meandering through Morcheeba pop and Sneaker Pimps sewer-trance. Today, with Portishead wallowing in the ether, Massive Attack losing its luster, and Tricky lapping at Ed Kowalczyk’s undeserving underside, Martina’s sound is severely bruised by its lack of any real innovation. Where its strengths reveal the skill in one of the genre’s leading names, the plodding beats, weak lyrics, and predictable electronic wash coat Anything with the lukewarm veneer that Nelly Furtado must have renounced right when she realized there was more money in mashing crackers into Lauryn Hill’s stew.

Similarly, the tracks on Anything read like a standard ode to love in all of its fireside physical and emotional paradigms. The record opens with the titular “Anything,” a pool of Hooverphonic swirls lulled by tidy acoustic guitar and a gorgeous vocal melody. Although the lyrics are, ostensibly, disposable noodles, “Anything” is sweetly reassuring, a strong track to return the listener to Martina’s mid-nineties savannah while hinting at something new in the nine tracks to follow. But then Tricky’s gritty mumbling staples a snaking bass line to hollow beats, and the simple triumph of “Anything” is already tapped down a few pegs in the second track.

“Ragga” isn’t a horrible song, though, as the chorus runs along Martina’s throaty mumbling into some spectacular juiciness. The travesty here is Tricky, his rap interlude one horrible line after another: “Someone wanna come around / Dumping fun around/ I bring my bat around/ And pop one in your shoulder.” The man’s guest spots have become formulaic and downright disappointing on a consistent basis, but it’s refreshing to hear Martina carry the song winningly.

She succeeds most when she sticks to familiar fare. “Sandpaper Kisses” strains against gangster rap before slinking behind an odalisque’s veil. “Ilya” sidles into a wall of programmed strings and layers of wailing that, while elementary, provide the most satisfying moment on Anything. The “Outro,” formally the intro on Quixotic, cruises with gospel splendor, but, like it’s name suggests, never works into anything substantial.

Credit should be awarded to Topley-Bird for breaking from some trip-hop stereotypes, as in “Need One,” an anthemic stomp aided by Queen of the Stone Age's Josh Homme and Mark Lanegan. That’s where the credit should cease. The crunching guitars don’t do much more than crunch, and Lanegan’s howling is useless fodder in the busy mix. The same can go for “I Still Feel,” a lingering exercise that glows in more sheen than Zero 7’s worst. Even “Lullaby,” with some interesting Sigur Rós squealing and a deftly plodding strum, falls limp before “Outro.”

Sadly, that’s it. Anything ends with all expectations met, but little else. Martina Topley-Bird has the kind of voice that deserves beautiful and strange accompaniment, and as such, most songs beg for so much more. The shadow of Tricky looms too harrowingly for Bird to really be able to forge her own original ground, but in a time when even Tricky seems too buttressed by his thinning reputation to create something worthwhile, Anything just doesn’t try hard enough.