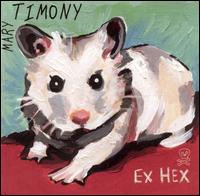 Towards the end of last year, I had a discussion with one of my friends as to whether someone like Joanna Newsom made "genuine" music or not. I argued in Joanna’s favor, saying that the quality and seeming honesty of her songs precluded any such false intentions and that, after all, it was possible that she liked to dress in fairy or elven garb “just because.” But as my friend kept repeating “you know she doesn’t really believe that shit,” I had a sinking realization that, sure, it could have been an act.

What does it matter if an artist’s stage persona/image is so contrived? My answer is usually "it doesn’t matter much, as long is the music is good." If your name is Robert Smith and you wanna spray your hair into a ridiculous mop on top of your head and put some white face paint on before you play me some amazing tunes, go right ahead. If your name is Joanna and you really need that fairy dress to feel comfortable up on stage, I’m not gonna try and stop you.

The problem seems to come when the image doesn’t fit the music or seems somehow off. Of course, with the dime a dozen bands who try on the image of the moment, like the Bravery, it’s easy to say, “shut up dudes, weren’t you in a ska band five minutes ago?”

For ex-D.C. punk-girl Mary Timony, something just didn’t fit when she seemed to abandon her roots and opt for Tolkien-inspired lyrics and garish instrumentation on her first two solo records. Now, Mountains didn’t exactly suck or anything, but it didn’t fill the sizable Helium-shaped void in my stereo, either. And while it didn’t seem like Timony was being disingenuous on her first solo records, she was wearing cat masks, singing about dungeon dances and the whole thing just felt sort of awkward.

Enter Ex Hex. Featuring a far more stripped down, mandolin-less sound produced by Fugazi drummer Brendan Canty, Timony focuses on writing straight-forward songs with nary a unicorn or dragon reference in sight. Her lyrics focus on relationships with men and the city, and though not her best, they just seem more natural. Timony’s guitar-work has always been one of her strong suits, so it’s nice to hear it up front on songs like the straight-up indie-rawking like the days of Sonic Youth long past “Friend to JC.” Drummer Devin Ocampo, credited with co-writing a number of the songs, expertly handles multiple rhythms and lends a full sound to Timony’s guitar and her throaty vocals, still with that breathy Kim Gordon-esque frankness that appeals to so many.

The album oscillates between a stripped-down early Helium feel and more proggy songs that sound like newer Stephen Malkmus material. The proggier moments, like “Silence,” tend to get bogged down in their own stilted rhythms. But on songs like “Return to Pirates,” Timony, well, returns to her former glory with a great guitar-pop gem. “9 x 3” is as good, featuring a scathing, winding riff at the service of an indie-rocker straight out of the early '90s.

It's worth noting that Timony’s dabbling in fairy-sounds presaged Newsom’s meteoric (in indie terms) rise to the top, so hey, maybe Timony was on to something. But to my ears, Newsom sounds more natural doing that sort of thing, and Timony is more at home on a record like this. Ex Hex may not be a return to Helium’s heights (go spin “Hole in the Ground” again if you have any doubts), but at least that awkward feeling is gone. Timony sounds fresh and honest again, instead of encased in the anachronistic amber of songs about dragons, fairies and dungeons. Album closer “Backwards/Forwards” may sum up the album best as the song features a chugging prog-tastic riff and lyrics that acknowledge that sometimes to move forward, you have to first move backward.