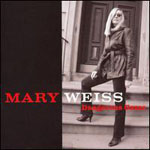 No one is more pleased about the return of Mary Weiss than I am. I have more obscure '60s girl-group comps in my collection than you do, and will throw down with anyone under 60 in a name-that-prominent-Brill-Building-impresario showdown any day of the week.

Weiss' '60s material with the Shangri-Las is the best of girl-group pop, a genre doing very well in the Zeitgeist these days. It's a good time to return, as deluxe box sets, scores of aping protégés, and the random flux of fashion have generated the sort of interest in girl-group music not seen in decades, particularly among young people. Weiss also has the luxury of not having stumbled through the '70s or the '80s with misguided, trend-biting comeback attempts, and she has the smarts to pick her collaborators well. The choice of Greg Cartwright in many ways mirrors Loretta Lynn's choice of Jack White for her excellent comeback album, Van Lear Rose (2004). Both are garage-punk classicists with an ear for old-timey sounds and a disdain for overproduction. Most importantly, what Dangerous Game proves beyond a doubt is that Weiss can still sing the hell out of whatever is thrown at her. Weiss has thus resurfaced with her cred, savvy, and voice intact. If I were reviewing how happy I am about this, I'd give it 100%.

Yet, with all the excitement surrounding Weiss' reappearance, things are getting a little out of hand. Dangerous Game is great for a comeback album, and that makes me smile in my heart. Judging by the chatter and glowing reviews, much of the music critical community must feel the same way. But cheers of "good for you!" do not a great album make. Sans-back-story, I'd be hard-pressed to apply a phrase more laudatory than "pretty decent."

The production, for one thing, tip-toes around Weiss' vocal like it's afraid to interrupt. No doubt this is in deference to her hesitant return and in recognition that it's her we want to hear. This decision does not, however it might appear at first, "put Weiss front and centre" or "stay out of her way." It's a tentativeness that implies she's not up to the task. Greg Cartwright has made some noisy guitar albums in his day (understatement of the year), and Weiss is clearly in fine voice. So, what gives? To be quite blunt: the guitars should be louder (and meaner) and someone should take the mittens off the drumsticks. Throw Weiss into the snakepit with some genuinely mud-slinging rock and make the whole thing spark. As is, the album is timid where it should be bold.

That is, if it still wants to be a garage-rock record. Which brings me to what makes Van Lear Rose a more convincing listen than Dangerous Game: it sounds like a Loretta Lynn album. And while it is certainly anyone's guess how Weiss, while approaching 60, might make a convincing girl-group record, it's clear that the garage-rock here owes more to Greg Cartwright, who wrote and produced the album, than to her. This is why organ-drenched ballads like the title track and mid-tempo numbers like stand-out "You're Never Gonna See Me Cry," closest to Weiss' signature fare, are the most convincing. The album, however, tends toward the sound of almost-there rockers "Stop And Think It Over" and "Don't Come Back." These tunes eschew Weiss' trademark belt-out drama and epic emotionalism for streamlined, single-sentiment rock-outs that need more bite in their bark.

The presence of filler is another unfortunate, if predictable, feature of the archetypal comeback record. "Cry About The Radio" is a holier-than-thou lament for the sad state of music today. With lines like, "Kids, kids don't know shit / They just want a hit / I don't write hits" (is this Weiss, or Cartwright talking?), the song insults the very demographic that has, in large part, made Weiss' resurrection possible. A more honest outlook would embrace both Weiss' own hitmaking past, and hits like b-side "A Certain Guy" that she covers. The re-recorded Shangri-Las song "Heaven Only Knows" is also largely dispensable, coming off more as a Cartwright wet dream than something Weiss really needs to sing again.

What should've been the best record the Detroit Cobras ever made ends up sounding like a domesticated beast that should be wild, fronted by a broad, dreamy vocalist forcing herself to sing lean, sharp lines. Still, Mary Weiss is indeed back, and we are all richer for it. Here's hoping that her next record is more her own.