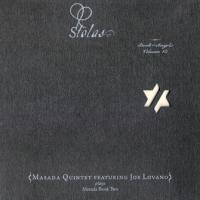 Sometimes I genuinely believe John Zorn is fucking with us. A couple years back he announced the end of the original Masada quartet—lamentable, until you start to wonder what the hell Masada is anyway. If it exists primarily as a songbook, then no danger of it fizzling out anytime soon: the book supposedly contains a good 500+ entries and has now spawned dozens of releases through the initial Masada series, the 10th Anniversary and Zorn’s own 50th Birthday Celebration albums, and now the Book of Angels.

While the idea of the songbook was to decentralize his own creative vision and allow other musicians to freely interpret his music, it’s always come back to him in a big way. The same artists pop up throughout, usually associated with the Tzadik label or part of the Lower East Side or both (Medeski, Martin & Wood’s entry in the last Book of Angels album was probably the most outsourced yet, and they’re just over the bridge), all of which bear Zorn’s influence directly. Don’t get me wrong: the concept and range of his projects are awe-inspiring, and Zorn’s a master curator and entrepreneur as well as artist, but sometimes I wish he would actually get up there and play more often. Perhaps the idea that he’s said all he wants to say as a saxophonist has legitimacy: recent albums that bear Zorn’s own name, like The Dreamers (2008), have been snooze-fests. In his heyday, the least you could say about his music was that it was full of fire and energy.

Hence why a reunion of the original Masada would be so welcome. Unfortunately, Stolas isn’t. Zorn’s alto has a guest-spot on “Rahtiel” (unsurprisingly, the best track here), and the rest is ceded to tenorist Joe Lovano, with the rest of the original quartet (Dave Douglas, Greg Cohen, Joey Baron) plus Uri Caine on piano. Lovano is no doubt talented, but in a sadly more orthodox way. I read somewhere that Zorn and his affiliates have become some of the most in-demand session players in the US if not the world, and much of Stolas feels like the work of musicians riding slightly more talent than inspiration. Painkiller and Naked City albums still feel shockingly futuristic some decade-and-a-half later, but where do you go from there?

Don’t get me wrong: in another context Stolas would be really impressive, but as the latest addition to a stellar series by the (almost) band that started it all it should have been better. And it’s not really a matter of it not being experimental enough: in some ways Bar Kokhba’s Lucifer: Book of Angels Vol. 10 (2008) was more conventional, but it was also closer to the energy of a live klezmer band. While other entries, like Mark Feldman and Sylvie Courvoisier’s Malphas: Book of Angels Vol. 3 (2006)—my personal favourite of the series—manage to be experimental in a way which deconstructs the very fabric of the melodies themselves, which I always thought was the point.

Thankfully, Dave Douglas’ trumpet sounds wild even in the most subdued contexts. He almost gets to let loose towards the end of “Rikbiel,” but then for some reason is reigned in towards the end, a stark contrast to the original quartet albums, where Zorn and Douglas would play off of each other in an endlessly-rising crescendo. Tracks seem alternately rushed (“Sartael”) and limp (“Tashriel”). “Rigal” is gorgeous—mainly because of Douglas’ Kind of Blue (1959)-esque soloing halfway through—but it’s a good example of the difference between Stolas and previous entries in the series. While here it’s played as a straight-up hard bop ballad, the same song on Malphas, with just viola and piano, is full of urgent but subtle tempo changes and aching melancholy. It’s not just that Zorn’s squealing sax lifted his music out of the parameters of jazz, but that it managed to convey an emotional turmoil that’s mostly absent here.