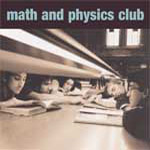 You can take the pop out of the sun, but untangling sunshine from pop music is another matter altogether. Especially in California, where “pop” really means “Beach Boys” and “Another Sunny Day” is both a Belle & Sebastian song and an uninterrupted way of life. Yet in a place where summers are endless and nights last until hung-over afternoons, autumn is perhaps the year’s one turning point. Winters are meaningless in a state where it never snows, but ah, the fall: trees turning to red and gold, the impatient wind, the autumnal chill. It’s the closest thing there is to a season here, but it takes an introspective sort to appreciate it.

It’s fitting, then, that the Seattle, WA-based Math and Physics Club record for Santa Barbara’s Matinée Recordings. Santa Barbara is a coastal, collegiate Shangri-la where the wealthy sun themselves and the young and beautiful live out their hedonistic fantasies along the beach. Where better to know the slings and arrows of the summertime, who better to answer May flowers with October chill? The band’s brand of indie-pop is hardly cold or abrasive; it’s just that its warmth is that of apple cider and knit sweaters rather than the unflinching sun.

That’s not to imply that Math and Physic Club is without reference points. The album’s production, far from the genre’s typical lo-fi, has a clean, austere quality to it that distinguishes it (at least slightly) from the scuffling scratch of early Belle and Sebastian, to whom the band is often compared. The group’s debut full-length will likely evoke more comparisons to the Club’s twee forebears, though the similarities rest largely in singer Charles Bert’s fey faux-accent. Still, the band has perhaps a closer resemblance to the Clientele or the Softies, at least in its use of the electric lead guitar as an omnipresent melodic voice. Like the Clientele, the Club recognizes the emotive weight of a liberal use of delay pedal, letting notes linger on like tearful summer lovers not quite ready to move on with their lives. If you haven’t figured it out already, these are songs for romantics. If you’re too cynical to hold hands or appreciate girls who play bass guitars (“La La La Lisa”), this is probably not the record (much less genre) for you. James Werle’s playing embodies this perfectly, with the band borrowing the Softies’ lead guitar-friendly framework.

There are flourishes, though, and while the record is driven by the basic interplay between acoustic rhythm, electric lead and tight bass and drums, there are tasteful appearances by piano, strings and horns. There are the strings that weep quietly over the build-up to the chorus of “Look At Us Now,” the coy xylophone notes that help “Darling, Please Come Home” take a brief, evocative detour from jangling, and the horn playing that brings such major key joy to “La La La Lisa” — among the album’s many great moments. And make no mistake, these are great moments, as well-crafted and accomplished as the genre is perhaps capable of. In a year rife with notable retro-referencing indie-pop releases, from the Pipettes to Camera Obscura, the Club seems to exist in a timeless void; this is a record that would’ve fit in well ten years ago and will likely sound as smooth and sweet a decade hence.

To that end, the lyrics tread well-charted waters — the abstract, bittersweet complexities of unrequited love and relationships on the rocks. But Bert approaches his themes with charm and poetic sensibilities, rational one minute (“Now I’m back here at your door / We can end this pointless war”), hopelessly romantic the next in “I Know What I Want” and a crush-laden kid in “La La La Lisa.” The optimistic closer “Last Dance” is as satisfying a narrative finish as the album could want: “Why does it have to be sad / Now darling, don’t be mad / Let’s put the past behind and hit the floor before the last dance.”

The ten tracks of Math and Physics Club are as snug as your favorite track jacket. It’s brief, the songs unbarring their hearts and melodies and moving on, like a red-gold rush of leaves blowing down the sidewalk. But then, autumn is always over too quickly. Math and Physics Club sing songs about girls you can’t forget and play music for seasons you already know all too well; there are plenty of pop albums offering sunshine, but this one will warm your heart.