Other Records by Maximo Park 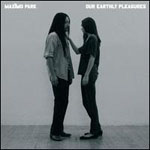 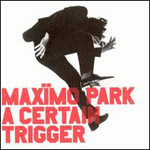 Hey, you remember the Strokes, right? Back in that gloomy fall of 2001 the pop music press, mainstream, indie, and everything in between, collectively lost its shit over those five New Yorkers, hailing them as the ambassadors of what was to be known as The New Rock Revolution. It sounded nice; the Strokes were completely awesome, after all, and the future looked rosy for a while until a bunch of batshit/woman-hating Australians came along and crashed the party and we all just gave up and started listening to Radiohead again. It was all just silliness, but, you know, it was a more innocent time.

I’m sure you’re already familiar with that story, but it’s worth going over here because it appears history has quickly repeated itself. In the post-“Take Me Out” climate of semi-mainstream British rock, with labels clamouring to sign any bloke with a couple of Strats, a thick Cockney accent, and a handful of Gang of Four records, and the music press chasing them all like a pack of hungry, overzealous, verbose dogs, a similarly staggering dip in quality has begun to take hold.

Enter Maximo Park, whose infectious single “Apply Some Pressure” attracted some positive reviews earlier this year. The single is pretty typical of its genre -- stop-start melodies, jerky guitars, furious tempos -- and while it’s certainly a worthwhile download if that’s your sort of thing, it’s parent album A Certain Trigger is as formulaic and boring a rock album as you’re likely to hear in 2005.

First track “Signal and Sign” opens with crescendoing drums and some dull arpeggios which attempt to manufacture tension that never arrives, eventually leading into a canned Clash-esque chorus: “I hope you feel cheated at home with all your lies lies lies lies lies!” “Graffiti” features bigger and meatier guitars, but again suffers from the lack of a quality hook or technical chops to make it worth returning to. This problem repeats itself throughout most of the rest of the album -- songs like “Limassol,” “Going Missing,” and “Once a Glimpse” all feel like shells of interesting songs, but all come without any elements that would reward repeat listens.

The only real exceptions to the album’s tediously ordinary Anglophilia come with its last two tracks. “Acrobat,” a surprisingly heartfelt down-tempo ballad, which, despite essentially being an appallingly crass aping of Joy Division’s “Atmosphere” with spoken word verses overtop, carries a certain emotional weight. “Kiss You Better” concludes the album in familiar power chord-friendly territory, but stays buoyed by virtue of its clever structure and bittersweet chorus. Hardly breathtaking stuff, granted, but paired together they offer some defence on any accusations of total one-dimensionality, if you can stay conscious long enough to hear them.

But these and “Apply Some Pressure” aside, there isn’t a lot here to recommend to anyone without a voracious appetite for canon-raping English post-post-punk. Sure, they have the requisite angular guitar work and tight rhythm section, and they sing about sexual frustration and social unrest in the same detached language, and yes, Paul Smith’s vocals accentuate every last nuance of his English vernacular. But who gives a shit? In the last year and a half alone we’ve had excellent albums from Franz Ferdinand, Kaiser Chiefs, Bloc Party, the Libertines and (especially) the Futureheads, each of which offer more refined and exciting takes on the exact same sound Maximo Park plunders for the majority of A Certain Trigger's innocuous 38 minutes. Without a single original idea and only one truly exceptional song, Maximo Park seem destined to be the equivalent Vines to Franz Ferdinand’s Strokes: harmless, hopeless, and hookless, and, if their singles take on British radio, bound to keep dozens of second-hand record stores across the UK straight through Christmas.