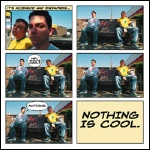 True or False: Peanuts and Corn artists excel in conveyed charismatic personality. Trick question. If you subscribe to their off-kilter system of ethics (which, by and large, I do), you ate up Pip’s “Hypochondriac” tirade against the Cult of Oprah and John Smith’s rollerblader body-check on Blunderbus. If something is ridiculous, you’ll hear about it from PNC. Nothing is Cool continues and pushes the label’s religious crusade against everyone who’s not them. McEnroe and Birdapres put their prejudices on parade, parade their platters of pilfered percussion, and prefix everything---even their oft-pop-rapping cadenc---with the sarcasm, insight, mockery, community commentary, and overall hip hop snobbery that you know and love if you’ve been following the label through its various releases. But you probably haven’t. These guys are barely-known south of Lake Windsor.

And that could be the biggest problem with Nothing Is Cool (I’ll get this part out of the way before going on about what a great record this is). If you haven’t been following the label, then you don’t know where their artists’ underhanded wit comes from. By now it’s so finely-crafted, sly, and integrally interwoven into their collective persona that even their most outlandish misanthropic nuances come shrouded in a false, smirking sincerity that might (and has) flown them under the radar of the uninitiated. And if that doesn’t alienate you, then their bile-on-sleeve ethics will; if you snort, drop or smoke, you’ll probably come away from this record whining over McEnroe’s line about an anonymous sonofabitch who “writes like someone stuck in prepubescence” and “makes jokes about cancer,” and, of course, who “smokes, because he’s like the worst person.” Maybe that’s why PNC hasn’t exactly broken the college circuit yet.

And maybe that’s why they couldn’t care less. Unlike Anticon, PNC’s snobbery isn’t artistic, it’s ethical; unlike Def Jux, their sarcasm and mockery aren’t social but interpersonal; and unlike RSE, their community commentary is resonant and grounded instead of elitist. Essentially, they pull no punches, swing at whatever looks at them funny, and don’t apologize. Finally, like Buck 65 (circa the Language Arts series) and Sixtoo (circa everything he’s done), their drums are, largely, sick.

“Nothing is Cool” plays like the “intelligent remix” to LSOB’s “Hey DJ.” Filtered and thickened high-end chords flesh the verses; godsend synthy harps and keys descend during the hook. The drums are an obese, slowed break made for rollerskating (but certainly not rollerblading), and the totality comes off as a post-old-school party-rap classic in the best possible way. Ironic revivalists Rod and Bird rant on trends, pop culture, and the iconoclastic. Bird attacks, well, us genre-happy critics with “Retro Nouveau / West Coast Electro / Ain’t a damn thing changed but the tempo” and mockingly concludes, “Cool to me is a comb that’s a switchblade.”

McEnroe goes a step further and pokes obsessive fans in the eyeball: “Dreams so real / Reality’s pitiful / Don’t put me on top of your pedestal / Kept at a distance for a specific purpose / You might not like what’s under the surface.” Welcome the anti-anthem for the ridiculously downward-spiraling idol-worshipping MuchMusic. Bring back Michael Williams; play this when he enters the Combat-Des-Clips ring.

“Broke Beat” sounds like your typical “give me the dough” plea, but it’s actually a covert harangue against consumerism that’s too clever for its own good, ending up as a call for someone to buy Bird a piggy bank (with a sweet little T-Love scratch at the end---where the hell is T-Love?). “Break Merchant” plugs in with McEnroe ruining the drums for would-be-beat-biters by whispering: “No, you can’t sample this break” throughout the intro. Fromage-filled organs and paranoid piccolos accentuate the best digger’s opus since Buck’s “Driftwood” (Apparently Bird’s got stuff so unknown it wouldn’t even sell on E-bay). “Bad Actors” sounds like it was taken from golden-era Wu-Tang’s vaults, and the beat for “A Little Bitter” is actually sexy with its sassy tropical xylophone hits and bounce-inciting percussion. To save myself I’ll say that this is on par with the super-hottt Lil Kim’s “Queen Bitch,” and certainly anything the sumptuous Foxxy Brown has done. And, yes, I will get all Ty Domi on you if you ever mention this review to me in person.

Duds: not all of Nothing’s comic characters are perfectly-drawn. “Family Business” does indeed recall Nas and AZ’s Mafioso days with bazuki-like Corleone strings and glutton-frumpy drum hits. I’ve yet to find someone who thought this was a good idea in the first place; the only reason you’d bring it back is to help Chef Boyardee soundtrack an urban-marketing program. “Wanted To Cooperate” sounds unfinished, and “F*@k You 2k3” is as dated as its title: both Roddy and Bird shopping-list the people who get to look at their middle fingers. Rule 1: never rap what you can put in your liner notes. Rule 2: if you do rap your liner notes, at least do so over a kick-your-ass break and haunted pipes like these.

Regarding these 2.25 slip-ups: forgiven. No one expects a contemporary hip hop album to be FF-less anyway (unless it’s Madvillain). Sadly, no one expects to need to hit the RW button numerous times, either, and that’s why “Party People” is such a treat. Again, we’ve got mid-'80s drum machine tin-rattle snares riding atop chunked-up, chopped hits. Buzzsaw acoustic basslines and scattering fiddle stabs lacerate the drums all under an eerie, dexterous single-string guitar loop. Bird continues the war on drugs: “Titties knockin' / Bodies movin’ / A lot of you been caught abusin’ tabs and hits.” This is equal parts party song and overzealous party-person fun-poking. McEnroe: “Teach your Dad the words to Plug Tunin’ / Perform that shit at the family reunion.” The name dropping (MC Serch, “Peter Piper,” Kurtis Blow) just ices the cake.

If you like your wit to sink in over repeated listens, like having your prejudices pulled apart strand by strand, and you value crisp, full drums and fantastic digging (done by Bird, assembled by McEnroe), then come get your dork on. Nothing Is Cool until PNC says so.