Other Records by Mclusky 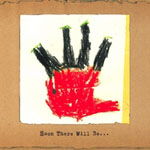 Shooting at Unarmed Men: Soon There Will Be ... 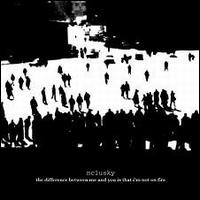 It took me a few months and one of the best rock shows I'd seen in years to fall in love with Mclusky, but they haven't given me much reason to look back since. At the time, Mclusky Does Dallas -- their second full length, after 2000's My Pain and Sadness Is More Painful and Sad Than Yours -- had been out not even half a year and was making waves as one of the year's best rock albums. But it was the two things that kept surfacing in every single fucking Mclusky review and article that made me want to hear them in the first place: their fierce similarity to the Pixies and their peculiar sense of humour.

To be honest, the almost non-stop Pixies comparisons was a bit of a letdown. Besides a few rather uncanny moments ("Collagen Rock" and "Friends Stoning Friends," especially), most of the record owed far more to the likes of Jesus Lizard, only really consistently touching back to the Pixies with lead vocalist Andy Falkous' spastic, high timbred vocals, balanced nicely by bassist Jonathon Chapple. But their tongues certainly were placed as firmly as possible in their cheeks; the first time I saw the band perform, they spent the entire show chasing each song with "that was from our new album, Parachutes." Their song titles and attire (the second time around, Chapple wore a blue cape for the entire set, sometimes dropping it like a drunk James Brown) certainly reflected this, as well.

The Difference Between Me And You Is That I'm Not On Fire, their third record in four years, certainly lets the group's sense of humour be known even before a note is heard. And though nothing has drastically changed since Mclusky Do Dallas besides a change of drummers (shit, they even brought back Steve Albini to produce the record), it becomes apparent even on cursory listens that Mclusky are onto something a little different and a little more non-sequitor this time around.

If anything, Fire is much more an album of extremes. When they take on a unabashed pop hook with "She Will Only Bring You Happiness," they go all out, even tossing in a harmonized vocal coda; which, in true Mclusky fashion, they use it to repeat the line "our old singer is a sex criminal." When they return to distorted-to-the-point-of-almost-disintingrating rock on album highlight "Falco Vs. The Young Canoeist," the results are similarly over the top and remarkable. "1956 And All That" finds the group taking a semi-serious political angle, "Slay!" takes the quiet-loud dynamic to ridiculously great lengths, and the acerbic "Icarus Smicarus" practically oozes bitterness.

Most significantly, though, is the record's focus on more developed structures and the use of atmosphere and space. "Your Children Are Waiting For You To Die" follows the very Dallas-ish "Kkkitchens, What Were You Thinking" with a uncharacteristically sparse melody. Likewise, "You Should Be Ashamed Seamus" builds from a repetitive, barely in tune guitar riff into one of their most sinister cuts yet, combining some of their best lyrics ("What's the point of do-it-yourself when it looks so shitty?") with a strangely affecting production that really drives the feel of the track home.

Though the incredible opening 1-2-3 of "Without MSG I Am Nothing," first single "That Man Will Not Hang" and "She Will Only Bring You Happiness" overshadows a slightly weaker track like "Kkkitchens," the momentum that they build only comes to near halt with "Children" before once again hitting a stride with "Icarus," straight through to "Seamus." Then there's closer "Support Systems," which seems a little too esoteric following the primal blast of "Falco," even if the layers of noise at the end almost make up for the languid first section.

So while Fire certainly isn't their best record yet -- Dallas still beats it rather easily -- it is a welcome release from the group, if only because of its willingness to move away from becoming another boringly predictable rock trio. As such, it ends up being more of a complete being, even with its faults, with less of a focus on a few really obvious singles, which had really carried the weaker moments of their last two records. There are still enough of them to make Fire very much worth owning and one of the year's best rock records, but it's still a little too far from the promise that had been suggested by Dallas and last year's EPs, something which is only partially carried out here.