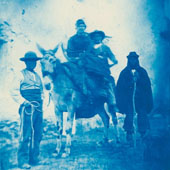 Mean Wind’s latest EP, the vertiginously monikered The The Guests Guests Are Are Gone Gone Gone Gone, is a haunted house of a record, all creaky and spectral. Upon first letting it fill my room, I thought my speakers, as they sometimes do, were picking up frequencies from a nearby radio station—tinny, phantom songs haunting moments of quiet, just faint enough to be charged with mystery rather than revealed as the ubiquitous pop hits or furniture store jingles they probably are. In headphones, though, Mean Wind’s music itself proves to be the source of this chatter. Its margins brim with all kinds of life: chirping birds, rustling trees, and voices murmuring to no one in particular. If the stuff going on at its outer edges is this interesting, just imagine how good the songs are.

Set as proudly and ostentatiously as a jewel in the middle of the five-song EP, “Kingdom Come” is the obvious stand-out. It starts sparsely—near-unaccompanied vocals that echo like clouds of wintry breath—then, rather suddenly, it bursts forth with the lush sound of tuneful, guitar-driven pop. As far as vocals go, Mean Wind recall the layered, nasal dissonance of Women transported into whatever forest Fleet Foxes rent out to record their harmonies. Their sound is outdoorsy, but not coy or pastoral—more that their music is imbued with a naturalistic attention to detail. Mean Wind do silence the way Grizzly Bear do silence: loaded with texture and floating dust mites caught in stray sunbeams. The Guests Are Gone showcases not just songs but a rich and resonant sonic space. I’d venture to say that people who like Yellow House (2006) because the music made them visualize the exact space it was recorded in—each song a different, half-lit room—will probably like Mean Wind quite a bit.

Though not as immediate, the tracks surrounding “Kingdom Come” have plenty to offer too. The EP unfurls with a lazy dynamism, each song a bit longer and less hurried than the last. “Equality Before the Law (The Guests Are Here)” is peopled with shady characters and the wobbling, echo-y plucks of a guitar. The following track, “The Guests Are Gone,” provides not only the titular narrative progression but also the compositional sparseness it implies. “They’ve taken their immaculate remarks and fled the scene” goes the lyric; and they seem to have taken the nervous-twitching guitars and drums with them: all that’s left is a voice reverberating over a heartbeat bass line. By the time we reach the final track, the seven-minute “Sunday Was a Writeoff…,” the tense atmosphere that begins the record has completed its slow dissolve. As the title hints, it’s a song about basking in a lovely day. Even the ellipses seem to trail off into blissful nothing.

Mean Wind is a Bandcamp band through and through, by which I mean that everything they’ve recorded (as far as I can tell, anyway) is up for free download there. In case you’re unaware, Bandcamp is a rapidly growing site that allows bands to host albums and singles for digital download, either on a pay-what-you-want model or—quite often—for free. It’s been fun to watch Bandcamp from its tottering infancy to now, just as it begins to gain footing. Though it’s still at a fresh and exciting stage: if there are still such things as business-suited A&R men, I don’t think they’ve yet caught onto Bandcamp as a breeding ground for new signees. So in our information-drenched, hype-band-obsessed digital age, Bandcamp has not only allowed independent artists a venue for increased exposure, it’s remained a personalized, anything-goes type platform (think of the early, formless days of Myspace—or, if you can, independent music before the Internet) which still gives a band like Mean Wind room to exist enclosed in an aura of mystique.

There is virtually no information about Mean Wind accessible through Google sleuthing (the only biographical fact they’ve seemed to unleash into the SEO wilderness is that they’re from Halifax); no publicity photos of them posing in funny sunglasses; no concrete indication that they even are a “them.” There is, rather refreshingly, just the music. With this, their latest release, that amounts to one other solid EP, What Happens in Hingham Stays in Hingham (2010), and a song called “Darius Rucker is DEAD” (“It’s the year 2049 and Darius Rucker is dead / I don’t want to know how it happened / No”), a cover song, it’s explained elusively on their Bandcamp page, originally done by an artist in one of the band member’s dreams. So that’s what we’ve got: mystique and some music. Which is enough for now, though Gone Gone Gone offers plenty of reasons to assume it’s only the beginning.