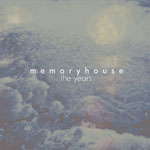 The so-called chillwave scene’s been thriving heavily of late, which, as far as I can tell, means a lot more exposure given to bands who sound like a travel-sized M83. The initial taste left by the genre is akin to a seventy-minute ambient album distilled into a bullet and shot point blank: sanguine pads, beat sequences, a little noodly guitar, and some touches of drone, all happening in under three minutes flat with just enough percussion for extremities. No more shooing people out of the house, running a bath to unwind with your favourite opus: now you can soak up the Enya vibes in the Express Checkout queue, a drum machine chaser and pedal production reminding you don’t dawdle too much—you were once punk.

And the most relevant experience I’ve had with chillwave (in my life) is the debut EP by Memoryhouse, a Canadian joint bedroom project of a composer and photographer who operate on first name only. Seriously. The bumpy dreamscapes shot by Evan and Denise happen at the speed of developing fluid, and although some might argue you could achieve the same kind of aura by doing vocal exercises over an Orb LP, the sound on The Years is more organically synchronised, emitting the kind of sluggish beauty Type Records might sign if they fancied something more poppy. In fact, the fuzzy altitude of “Sleep Patterns” is a fantastic Type counterfeit, guitars spilling like light across what starts as an ominous rumble into Hades. Some tight layering and Casio beats stave off the “stoners with FX peddle” tar brush, and Denise Memory’s tiny-but-gruff vocals seem sung in a Japanese accent.

Even so, this still so far feels slightly like mobile phone post-rock, and it’s not until one enters the reflectors of “Lately” do any gears start to line up. Here it’s plain that Memoryhouse, unlike other ‘wave dreamers who play whalesong tapes sped up, actually know how to handle a pad, producing one which sounds like an Eno vinyl so deep in dust you could mow it. This is a rare cacophony—even My Bloody Valentine and Creation Records would struggle to straighten production—and goes through your eyes and down to your lobes like a warm kind of painless migraine. “Lately / I’m not sleeping / I’m not breathing / Without machines,” moans Denise, her nose full of tubes as she’s thinking she’s drifting above the sea, before adding, “Shut me off.” If that’s how comfy a coma really is, sign me up.

The b-side of Years is slightly more lively and rises above the ambient vacuum by occasionally slapping a listener with revivers (Evan Memory’s scratch-rap on “The Waves” is one such particular highlight). This technique may sound groundbreaking to the chillwave Facebook group, but there are others who’ll guess (correctly) this is just Porn Sword Tobacco circa 2005 stripped of his quirky interludes. That’s by no means a crime, and even if it were you’d struggle to make it stick—I’d go to put on “Lately” before slipping out to work and in its place instead find “To The Lighthouse.” It really is that malleable: too stoned to be sad, too sad to be high, existing in its own mischievous afterlife, like waking up on a long stretch of road and realising it’s OK, it’s not you who’s driving; if we crash, I will get paid.

Just close your eyes, adjust and float. The calm computer light-storm you fall into on “Lighthouse” now features some prairie guitar tricks, the mix taking place in (I think) the same echo chamber Tears For Fears used on “Pale Shelter” (1982). These strange but comfortable sounds help sew up a very subconscious twelve minutes, and left me feeling more than a little like young Mark Lester wanting more. It’s a hypnotic ride despite its tiny flutters of anarchy (we spotted you, Ronan Keating sample in opening passage), but if you want to hear a dolphin record that retains the pain of the tuna nets or just fancy a rudderless boat trip, I’d recommend you take The Years with you. Don’t bother with that daft orange life-jacket; that’s just bread for the jellyfish.