Other Records by Merzbow 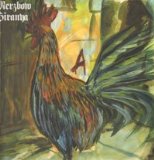 Given that Merzbow has released more albums in 2009 than some of our staff writers have published reviews, and being that Hiranya itself has no special qualities distinguishing it from either of his other two records released in August alone, the function of this review is rather questionable. Especially since readers with even a passing familiarity with the genre will have already decided in advance of reading this review whether the album in question will be remotely appealing to them. Merzbow has released nearly 200 albums, and with the exception of his split with considerably more palatable noise practitioners Sonic Youth, CMG has reviewed none of them. Out of hopefully understandable necessity, we’ve neglected the entire career of one of experimental music’s most enduring, interesting, and relevant figures. So, for good or ill, let’s start here.

It’s difficult to talk about Merzbow and the noise genre without getting into broad generalizations or trite platitudes, but there are some pretty simple and superficial things worth mentioning about Hiranya for the sake of clarity: this is loud, abrasive, difficult music. There are many who would not even technically consider this music at all. Those people, in the eyes of the genre’s ardent supporters, are mainstream philistines who just don’t “get it.” The truth is somewhere in the middle: there is nothing intrinsically “bad” about Merzbow or noise, of course, but the music on Hiranya deliberately opposes most traditional sensibilities of good taste. It seems fundamentally grating. And Hiranya, it’s worth noting, is a fairly standard Merzbow record, in that its conspicuous abrasion is characteristic of most of his discography. And so, by extension, he deliberately opposes traditional sensibilities of good taste and makes music that is, for the most part, uncomfortable to listen to.

A common conclusion, then, is that noise artists like Merzbow don’t like you. Or at least they don’t wish to please or satisfy you. It’s true that Hiranya shares certain sensibilities in common with the Dadaist movement, but the overlap is strictly aesthetic—in their common desire to employ the unpleasant and unappealing as tools and conventions, both make art that is decidedly repellent. And the Dada crew really didn’t want to please or satisfy; that movement was highly political, entirely ensconced in a broader cultural discourse. But I don’t read Merzbow’s fervent opposition to a tradition and history of taste as especially politicized. Hiranya hardly functions to incite controversy or outrage, and the potential to shock or surprise has been nullified by a culture whose consumption of everything from gorno horror to Manhunt 2 has rendered even the most extreme forms of artistic expression relatively flaccid. Even in his extremity, Merzbow lacks the power to truly offend; thus this is nothing more than stylistic fancy and whim, an exhaustive exploration of a crevice of art few others care to examine so deeply and thoroughly. And in his continued reliance on convention, on his own veritable Merzbowisms, Akita distances himself not simply from the political, but the genuinely experimental, too. Hiranya sounds too much like its 200-some predecessors to be an “experiment” in any meaningful sense. This is plainly a genre piece, it’s just that the genre in question has been problematically contextualized as fundamentally “experimental” since the beginning.

That’s fine and all, but where does that leave us as far as Hiranya is concerned? Well, it’s a pretty good effort—certainly nothing exceptional for this artist or noise in general, but roughly on par with this year’s extensive and likeminded 13 Japanese Birds series. If you’re familiar with his work, you’ll understand what I mean in saying that this is yet another Merzbow record; you will not be surprised, or particularly disappointed, with what you find herein. If you’re new to Merzbow and like what you hear, good news: he’s got you covered with seven (!) additional studio albums on the way before the year’s over, each sure to sound a whole lot like this. Or, y’know, if you’ve got 500 bucks and a couple of months, you could always work your way backwards.