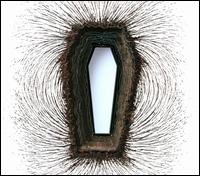 Metallica have a weird legacy, in that they are simultaneously the band who both most and least deserves their vast commercial success. Their recorded output in the ’80s, while certainly not flawless, is utterly peerless in the genre; their only real competition was from Slayer or former member Dave Mustaine’s Megadeth, and both were creamed in 1986 with Master of Puppets, forever the heavy metal album everybody admits to being great. Tackling drug addiction, nuclear war, and psychosis without so much as a whiff of coherency, the record was proof that the kids were paying attention and concerned about the big issues of the day, they just didn’t have the first clue what it all meant. 210 BPM riffs in varying time signatures seemed a lot easier to deal with, and were.

But bassist Cliff Burton’s death would prove to be a blow from which they’d never recover. Replacement Jason Newstead was literally inaudible on …And Justice for All (1989). Though he was all over the blockbuster Black Album (aka Metallica [1991]), he simply wasn’t allowed to play anything resembling what had become, iconically, Metallica music. That was still a terrific album, though, as the band’s forays into groove riffing and power ballads were anchored by uniformly excellent material. (“Sad But True” remains drummer Lars Ulrich’s finest moment, due entirely to the fact that the beat never asked him to do much and “not much” was the best the Dane could do.) But then the band somehow decided that its abysmal 1995/6 studio work deserved two eighty minute albums, and in the process (the real nail in the coffin) cut their hair. The haircuts were the perfect metaphor: a band that once made a proud point of abjuring radio play and MTV coverage was now cynically getting their alterna-rock look on and, it seemed, adjusting its music accordingly. It was a startling crisis of confidence, and it only got weirder: they headlined Lollapalooza; they made a record with the San Francisco Symphony Orchestra; they sued Napster (a clear overreaction to a sensitive subject, that being the track leaked in question was their total phone-in for the soundtrack to Hollywood event movie Mission Impossible 2, yet another in a long list of Metallica violations); they covered Bob Seger. By the time of the totally irredeemable St Anger (2003), one could argue that Metallica and Keith Urban were fighting for the same audience, and they lost.

So five years later comes another new album, with Rolling Stone covers and VH1 specials baiting us with proclamations of “guys, they’re back!” No one buys into it, of course, but anyone who was male, North American, and thirteen years old when they couldn’t go half an hour without hearing the Black Album’s singles (by which I mean this author, but on reflection I realize that means literally anyone meeting geographic and gender requirements born one second after I was) is going to listen to it anyway, because, sigh, cultural phenomena. Besides, the new single sounds sorta like old Metallica. Much has already been made of the song’s explicit “One” plagiarism, both in its general arrangement and the machinegun riff, but I’ve yet to see anyone talk about the ten or so riffs that follow it—each failing to rinse the lousy aperitif and all indicative of where the real story of Death Magnetic is.

It’s odd and telling that the name everyone throws out isn’t Kill ‘em All or Puppets but Justice. Prior to St. Anger, And Justice for All was the least linear or logical record the band had ever made, a nonstop cavalcade of metri, keys, riffs and tempi thrown all over each other, a listening experience that at times felt like the band was half the time asking themselves “what’s the most counterintuitive thing we can throw after this section,” and half “ah, fuck it, let’s throw the F# riff back in there.” In comparison most of Death Magnetic feels arbitrary, with few moments equaling the great arrangements of Master of Puppets, and, worse, no moments equaling the still inspired songwriting on Justice. They’re unable to reconcile the eighties with everything after; awkward choruses that would’ve been weak on Reload and St. Anger are thrown right into the middle of otherwise righteous thrashing (an especially frustrating example is the otherwise fine album closer “My Apocalypse”). James Hetfield’s singing is at its absolute nadir, heavily treated with Autotune and grunting out words about on par with song titles like “All Nightmare Long.” And we haven’t even waded into “The Unforgiven III.”

So it’s actually pretty god damned amazing that the album is as satisfying as it is. “That Was Just Your Life” opens the album with the kind of slow, classically influenced guitar piece that marked Metallica’s classic era, before bursting into a thrash riff panned hard in the stereo mix. Certainly a cynical sop to the fan base, right? But the riff rules, so much so that that the Autotune’d vocals are forgiveable, especially when the band follows it with “The End of the Line” and “Broken, Beat & Scarred”—their best songs in almost twenty years. They also make the classic rock riffs more powerful for the contrast, but that credit probably goes to new hire Rob Trujillo. Metallica finally sound as good locked in a groove as they do full-speed ahead, and that has to be the result of the fresh life in the battery. Kirk Hammett especially proves the old Zen koan that you can’t miss someone until they go away. Never a particularly inventive or melodic soloist, he has nevertheless always been a very ballsy one, and he provides some truly great, unrestrained soloing on virtually every track. Even “The Unforgiven III” isn’t outright terrible, despite all parties’ best efforts which include a grand piano and a horn section. (I had a lot of fun making up imaginary lyrics to the song before I heard one note: “Lars, Kirk, and me / are the Unforgiven Three.”)

All of this provides a great recipe for exactly one good listen. That one listen is best the volume down though, as Death Magnetic might very well be the most distorted, punishing mastering job since the advent of the CD. (I wrote that line in a notebook before I learned this was a very popular sentiment, and a source of some controversy, with mastering engineer Ted Jensen foisting blame on mixer Rick Rubin and vice versa.) After that, the charms of the album become significantly reduced, since all those riffs invoking “Blackened” or “Master of Puppets” will just make you want to play the genuine article. Still, the lining of this cloud is as silver as Hetfield’s goatbeard: if they can rediscover their songwriting, there’s a lot that Metallica Mk. III (“R&B Illiad”? “Gilgamesh Hoe Down”?) has going for it, specifically the revelatory playing of Trujillo and Hammett. It’s just too bad there’s no telling where the artistic and commercial aims of this Metallica begin and end.