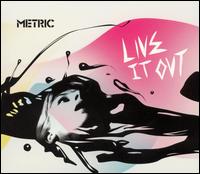 Metric: Live it Out 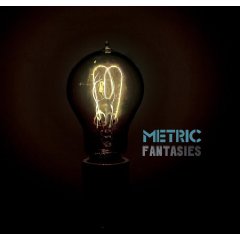 There’s a strange duality to Metric. On the one hand we’ve got the mediocre indie rock band out of Toronto: they’ve released four full-length albums to lukewarm reviews, they’ve been playing clubs across the continent and the world at large for several years, and they’re associated with a number of other trendy indie rock groups, most notably Broken Social Scene. Then we’ve also got Metric the minor indie phenomenon: their records have gone gold, they get regular play on commercial radio, their songs can be found everywhere from Grey’s Anatomy to Hockey Night in Canada, and they play sold-out shows to crowds of thousands. Metric, more than any Canadian act besides maybe Leslie Feist, continues to straddle the line between independent/underground and straight-up mainstream. They’re young, hip, and largely inoffensive, “edgy” enough to stay cool but pleasant enough to win over my mom.

As an aesthetic, the “Metric sound” consistent from 2004’s Old World Underground through to their latest makes no sense. Haines’ voice would be best employed in the context of something quiet and simple—as it was on her solo record, Knives Don’t Have Your Back (2006)—but Metric choose instead to juxtapose her croon with hard-rock guitar and the occasional glam-synth. The stripped-down style shown off on the band’s once-lost debut Grow Up and Blow Away, reissued last year, was rejected in favor of the balls-out rock which now defines the bulk of their recorded output. The approach, though an obvious fan-pleaser, is not without its detractors: many slammed Live It Out (2005) for fixating largely on the heavier side of indie rock. But that album, like its predecessor, had moments of aesthetic simplicity which were comparatively successful. “The Police And The Private,” Metric’s best song and Live It Out‘s sole reprieve from overzealous rocking out, revealed in its flirtation with reservation and refinement a band of potential and promise, provided they could divorce that side of their music from the shit which tainted everything else they touched.

And so now here’s Fantasies, Metric’s first studio LP in nearly four years. I went into the record not with expectations so much as a hope that Metric would do right by their evident potential. But, as my rating might have already suggested, I’m more than a little let down: Fantasies is, rather unfortunately but perhaps not surprisingly, just another Metric album. Here they return to the formula which brought them such great success (and putting it that way, I guess, why wouldn’t they?): heavy, guitar-fronted rock songs filled to burst with backing vocals, synth flourishes, and all the magic a professional studio production team can provide. It all sounds immaculate, but it is deplorably dull.

As on Live It Out, Fantasies benefits from moments where the brawn of Haines’ backing band takes the back seat to her intimate vocal performances. The standout here is the surprisingly minimal “Twilight Galaxy,” where Haines begins to flirt with the mood and atmosphere of records like M83’s Before The Dawn Heals Us (2005) or the Cocteau Twins’ Heaven Or Las Vegas (1990). But, alas, not only is this flirtation with excellence frustratingly brief, it’s immediately followed by the album’s worst track, the predictably superficial and vageuly-political “Gold Guns Girls.” Haines has always struggled as a lyricist—most notably on the dreadful “Handshakes,” featuring this gem: “Buy this car to drive to work / Drive to work to pay for this car”—but even for her this is insubstantial: “All the gold, and the guns, and the girls get you off / All the boys, all the choices in the world [...] More and more, more and more / Is it ever gonna be enough?” At moments like this—and the record’s first single, called (ugh) “Help I’m Alive”—Metric are perilously close to becoming the Chuck Palahniuk of indie rock: wafer-thin pseudo-intellectualism masked as insight and revelation.

The first time I saw Metric perform live was in the summer of 2005, opening for Broken Social Scene and Stars at an outdoor summer festival in Ottawa. It was an energetic, engaging performance; Haines was manic, at times spectacular, and I was instantly won over. But, going back to the strangely dichotomous nature of Metric, the good was immediately followed by the awful. The second time I saw Metric was in early 2006, headlining a club show with Jason Collett. It was exactly as good the previous performance, but this is precisely because it was exactly the same performance. What seemed loose and spontaneous the first time now struck me as conspicuously rehearsed and stagnant. Everything was identical, from the set list to the banter. This is Metric: substance is not simply effaced by highly-cultivated style, it’s subordinate to and eventually replaced by it. Given their current affluence, it’s no surprise that they are unwilling to evolve. But as long as they continue in the direction indicated by Fantasies—marked by middle-brow lyrics, left-leaning but superficial political conceits, and a stubborn allegiance to the stylistic conventions of hard-rock—Metric will fail to capitalize on the glimmers of promise faintly noticeable here and elsewhere. Too bad.