1. Circuitry of the Wolf
2. Chinaberry Tree
3. Why Are You Looking Grave?
4. Apocalypso
5. Special
6. The Zookeeper’s Boy
7. A Dark Design
8. Saviours of Jazz Ballet (Fear Me, December)
9. An Envoy to the Open Fields
10. Small Ambulance
11. White Lips Kissed
12. Louise Louisa 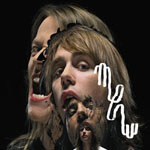 And the Glass Handed Kites

Epic Myth No. 1: Eliminating that second or two of dead space between each song makes "one big song."

The trick fails. Even when mashing a bunch of songs into a giant mess or connecting them with emerging and receding swells of noise, the listener is still able to distinguish between where one song ends and the next begins, especially when the songs are in entirely different keys. Secondly, the listener will rarely find that songs wrecked together are connected in a meaningful way, let alone find their working concept of a sequenced album debunked. This stunt has been attempted countless times, and if it has ever worked, I’ve never heard it. Think the claustrophobic bleeding of Sloan’s Between the Bridges or the dystopian clutter of the Mars Volta’s De-Loused in the Comatorium.

The real shame is that on this album, as with Sloan and the Mars Volta, the songs become secondary to the gesture. They are denied a sense of finality or, in And the Glass Handed Kite’s case, are sometimes deprived of an ending altogether. Mew build their technical emo-pop to gigantic levels that border on convincing just to force the collapse of those heights into the beginning of a new song. Album opener “Circuitry of the Wolf” begins tacky and then, by sticking to its guns and playing its heart out, almost has you sold… before slamming head-first into the wall of the next song's tempo shift. A novel something that can be accomplished quickly and with minimal effort during the editing process can be torn down just as quickly and with just as little effort during the listening process.

There’s a philosophy stating that if you were to go back in time to 1957 and play a record produced to today’s standards for some poor teenager, it would melt his face. That might be true, but even today it’s hard to talk about the quality of music when its production is this face-meltingly enhanced. It first struck me at a hockey game during one of those pre-face off, three-second music clips that generally oscillate between '70s staples and Andrew W.K. One snippet came from a band whose production mirrors Mew’s. I turned to my friend and asked him to listen to the snare. It was otherworldly. It sounded like an explosion in a video game, pumped out in 5.1 surround sound hallelujahs. I then turned to him when they were playing “Slow Ride” and asked him to listen to the snare again. It sounded like a drum.

This may be one of the more subjective myths, but let's at least agree that producing an album to sound so unnaturally blusterous is at least a little bit ridiculous. Subjecting one’s art to this kind of treatment turns it into little more than an adrenaline floodgate. And somewhere in all that bombast you forget that the band can actually play. The one-two punch of “Apocalypso” and “Special,” for example, is tight and inventive. It’s just that it sounds like two hundred people are playing it instead of four, and that’s more annoying than epic when the listener knows the truth.

Epic Myth No. 3: Using song titles like “Saviours of Jazz Ballet (Fear Me, December)” endows your songs with significance and is not, actually, embarrassing.

Also see: “An Envoy to the Open Fields,” “Circuitry of the Wolf,” and, most hrumph-inducing of all, “The Seething Rain Weeps for You (Uda Pruda).” Besides the fact that rain does not seethe (nor would it seethe for anyone in particular), epic song titles, especially those that use brackets so liberally, are telling. And they generally point a finger at the lyrics.

Mew populates its opus with platitudes and blanket statements, with Bjerre singing, “Your mouth is hiding / You've got joyless eyes / Softly contriving / All the terrible things that shook up our hearts enough” on the first single, “Why Are You Looking Grave?” It’s a perfectly nice, picaresque U2 prayer for the world, but it’s not exactly profound. It’s something that’s been observed too many times before, and the weight of the band’s self-imposed “substance” smothers the song out. Meanwhile, “The Zookeeper’s Boy” assures us that life “is just like a giraffe / You have to climb to find its head.”

Epic Myth No. 4: Setting your keyboard to "epic" makes the song "epic."

…as with the opening to “An Envoy to the Open Fields,” the ending of “Chinaberry Tree” or the entirety of “White Lips Kissed” (which doesn’t just set the keyboard to ‘epic’ but to ‘WW2 movie epic,’ complete with accompanying militaristic snare rolls). Mew depend upon synths and saturated strings to get their point across almost as much as Coldplay do on X&Y. Extended keyboard segues have been picked over too many times since the release of “Where the Streets Have No Name” for this to be considered effective anymore.

Epic Myth No. 5: Allowing your record label to write you an epic bio is a good idea.

“A cat walks through a forest, playing a fiddle. A swarm of glutinous, fleshy sea aliens with nipples for eyes come gobbling out of the deep. A column of electric space lightning spasms laser bolts out of the screen. J Mascis with the irises of a devil. Such are the weird, Coleridgian visions that crowd Jonas Bjerre's nightmares night after night.”

So reads the first paragraph of Mew’s bio. I mean, maybe the J Mascis thing, but a cat walking through a forest playing a fiddle? That’s not a nightmare, that’s adorable.

Yes, Mew are a bit of an easy target, but here, on their fourth album, they’re so, so close to respectability. If they could only take the visions they purport to see, understand the absurdity and hilarity in them, see them not as nightmares to be ponderous over but as reasons for laughter, then they could anticipate and subsequently capitalize on the expectations of their audience. The band does have the musical ability, their songs are reasonably well constructed, and the melodies are there. It’s only the ridiculous costume of importance they wear so self-consciously that’ll keep them from ever joining the party.