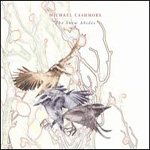 A tip sometime, for those who haven't: Sit and watch snowflakes settle under the halo of a street lamp. On a quiet night their slow drift from a choking black sky down to the ground is entrancing, drawing the eye hypnotically to their lazy free-fall. Such a gentle tempering of space and situation seems to slow time, inexplicably clawing at the speed of the world until all that remains is that moment, that spot; soft white interference surrounded by darkness and everything quiet and still. It's one of the perfect small solitary moments of being alive, like the first rush of immersion after hitting a body of water, the cold side of the pillow in summer heat. It would be easy to claim all of this as the ramblings of a gooey-brained stoner, but to deny moments like these is to dismiss so much. These smaller elements are inescapably intermingled with the grand experiences, complementing each other; so many pieces of steak, so much seasoning.

It's odd how a soft, turning piano figure can relay the feeling of snowfall so well; those delayed felt hammer footfalls hitting taut steel strings, suggesting the sensation so closely that it instantly conjures a mental image of a slow white swirl of frost. Michael Cashmore's pale, elegiac chamber instrumentals display an empathy with this aesthetic, a gentle winter display reflected in the mournful tones of his piano and snaking clarinet. Known for his work with Current 93, Michael Cashmore is a past master at creating musical worlds suffused with strange and haunting energies, places that suggest reflection and contemplation pricked with the bittersweet needles of loss and remembrance. Setting these passages around the angelic wavering sighs of Antony Hegarty's vocals and the decaying religious iconography of David Tibet's lyrics suggests a perfectly conceived match. And so it proves to be: these three collaborators draw out the finer points in each other, producing a wondrous setting of silence and sadness, a tangled graveyard swept with a deep glacial blush.

By choosing to bookend his collection with two purely instrumental pieces, Cashmore reveals his landscape slowly, taking time to ingratiate the listener, ushering in his self-contained world of cracked ice and weather with light fingers. The introduction and subsequent sudden departure of the figure of Antony is employed like a chance encounter with a stranger; a wraith passing in the depth of a deep February mist, whispering crestfallen, tremulous stories of defeat and ecclesiastical fervour. "Your Eyes Close" in particular displays a thousand fathom sadness; its prayers of death and soft desire lilting through a slow stepping piano, wheels creaking along a thick stone road to some final resting place for a life too soon laid low.

That such a brief collection can be so moving and suggestive is testament to Cashmore's skills as an arranger and collaborator. He's created a distinct series of songs that suggest a solid, discernible image, one of singular moments in time allied to particular emotions, yet also one that would plume and disperse like smoke at the slightest touch. Listening to this EP in a haze of sunlight feels like a slight betrayal, as the heat and bright green crackle of the park where I'm seated is completely alien to the sounds contained within these songs. This is deep winter music, music that floats and shimmers in a darkly inked sky; stars of frost dancing in the empty space. Waiting to be at peace, waiting to be gone.