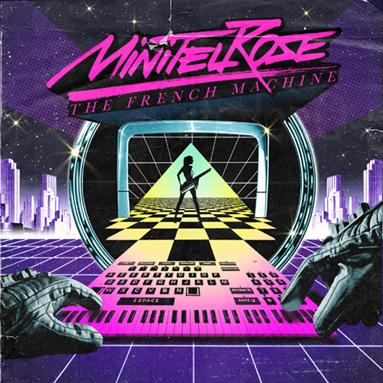 Look at that cover art—Minitel Rose’s half-hour debut screams en Français before you’ve even played it (not that there’s room for ugly xenophobia when you’re balls-deep in eighties lasers), and here we have another Parisian retro-record being presented in double meaning (originally first seen as an enhanced CD in the lead-up to College’s Secret Diary [2008]). It’s now being sent overseas by Europhiles Futur, who want to see if the rest of 2009 can slip back a quarter of a century and party. The odds are mixed to steady: what separates this trio of throwback electroheads from their more chic contemporaries is that here, nostalgia is confined to the cloakroom. Minitel Rose want to recreate the eighties—medallions, bodyswap comedies and everything—and they do so by swizzling some Giorgio Moroder with the Tech-Noir scene from The Terminator.

So we’re back to 1985, then, a formula that’s got a lot of bums on seats (or off them if you count from when the beats start), with first single “Be With You” earning a hundred thousand hits on MySpace—just on that day it was uploaded. Perhaps not just another “weren’t Erasure great” clone, then. The track’s attraction is clear from the start: the drums from “London Calling” get with mounds of sugary funk, spawning a riff even Britpop wouldn’t stoop to after one quick wriggle on the dancefloor. It’s an arresting mess of guilty pleasures, and vocalist Raphael d’Hervez borders on soprano as he flits between digital hooks, going back in time to reshape Daft Punk’s childhood. But therein lies the problem: Minitel Rose are slightly too slow for the curve, with Cut Copy, Air France, and the Junior Boys having already run tape round this market. It’s not that The French Machine is weak, per se—if this is your first time flirting with synth-pop time capsules, you’ll love it—but it does feel in places like Teen Wolf Too (1987), i.e. Michael J. Fox said forget it.

Ignoring rival accomplishments, though, The French Machine has still got its fair share to offer in isolation. The scissor beats of “Elevator” help ratchet out a Kraftwerk spoof, sliding like Max Headroom’s haircut around the incredibly French pronunciation of “I take dis elevator / I try to remember duh number of duh floor,” and “Magic Powder”‘s bare-faced cheek leaves you in no doubt as to what decade you’re in. The blats of synth and wine-bar chuckling pile nostalgia on by the barrowload, d’Hervez’s voice so high the coke must have slid to his vocal chords. Its power is deep but fleeting: the night will never end; every building’s from Blade Runner; this glow won’t desert me till sundown. It does, of course, with the rusty robot howl of “Continue” playing out like a smug drug commercial, making you ache for sobriety and blankets.

By the end of the seven-strong assault you’re left sweating in designer duds, feet blistered and heart rattling evilly for more. Whether you can hack another round is a mark of your own mettle—mixing vintage Air with Aqua, as The French Machine so often does, can be nothing short of hazardous. The two sounds fuse but at the cost of something higher, and it’s for this reason I’d suggest that The French Machine comes bearing a sticker: “This project celebrates the love of Reaganomic entertainment. Not to be enjoyed by anyone with contrasting memories.”