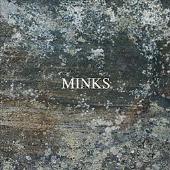 With eyes thick-rimmed in black liner and dark, mohawkish punk-goth hair coiffured to the tempestuous likes of Frank Gehry architecture, the figure on MINKS’ pre-released 7” cover art conjures one hell of a dark-hanging cloud over By the Hedge before you even start listening. Lest I mention the slew of people describing MINKS’ sound as some gothic, Brooklyn version of the Cure, while you can certainly see the band’s affinity for the Cure, this is one surprisingly light album, flush with really catchy gems that almost nudge it over into a bright, but wounded, genre of pop.

MINKS are to distortion what Sleigh Bells are to whatever it is they do (cheerleader metal?): instead of using noise to bury or blanket their songs, they celebrate the nostalgic, the indistinct, with a warmth and rare awake-ness. It has acuteness; it has moments of sharp inquisitiveness; it has a clear-eyed focus executed with an ambient lightness that elevates the songs just as the ends of phrases are elevated by beautifully lilts in Sean Kilfoyle’s and Amalie Bruun’s voices. All of this separates By the Hedge from its bleary-eyed, summer predecessors, just as its brightness separates it from its darker, mid-winter chillwave contemporaries. For the life of me, I can’t find anything chilly about this album.

Opening track “Kusmi” has a way of rushing in on the listener, with a crash of buzzing elements instantly infectious, simple, and startlingly temperate. (I have been whistling the first strains on and off for about a month now.) And while I keep waiting for the darkness to descend on the songs or a track to be fuzzed into oblivion, it just…never happens; every song is orchestrated with shimmery synthesizer notes suspended high above the song. True to its title, “Out of Tune” almost playfully slides in and out of sync and—obviously—tune, while the mumbled and yelled-from-a-distance vocals tangle up in the atmosphere, mimicking the complexity of a Dr. Seuss machine. Even tracks with surefire downer titles like “Cemetery Rain” are deceptively full of brisk percussion, a dancing bass line, and pop gestures—check the crisp, upbeat drum-kick intro and the occasional hint of xylophone or chime.

This preciously propitious, bruised aesthetic works really well for MINKS—particularly so in the key pop track on the album, “Funeral Song,” which owes at least part of its appeal to the assertive bass line and chorus, where Kilfoyle’s vocals emerge completely from the buzz. This is to the song’s benefit, even though Kilfoyle does kind of sound like he’s doing a cruel impersonation of Bob Dylan with a bee-stung lip, singing staple pop lyrics like “falling in love,” “touching your skin,” “kissing your smile,” and “so long, the summer’s gone and I like it.”

These romantic memories are meddled with in subtle ways each time they’re pulled out for inspection, most often with some big, romantic, hipstamatic soft-focus lens—and this is usually for the better. In this hay-day of pop nostalgia, the nostalgic sensation itself is so frequently re-imagined as an entirely joyful blip of reminiscence. Too often the small pains latched onto in those moments are mistaken for the simple, acceptable pain of knowing they can’t be re-visited in their pure form. That pain is not just a grappling with mortality issue or yearning for the ever-so-cozy past; shit seriously hurt. And that’s what makes nostalgia so conflicted and enticing an experience.

It’s a pain MINKS embrace in conscious ways without giving in to a popularly disaffected narration. Tracks like “Funeral Song” aren’t merely shrugging off the summer fling, or looking back wistfully, or even remorsefully licking those old wounds. MINKS are curiously, earnestly touching their bruises, peeking under their scabs. Theirs is an album full of songs that are, yes, catchy, and, yes, often played through at least a small buzz of distortion. But for the distortion, nothing feels obscured. It’s like remembering something with such emotional clarity, that even while you enjoy pressing the wounds you know you wouldn’t want to go back there.

While the simplicity of the often bare-bones or ungraspable lyrics makes it a catchy album, the ambient brightness elevates it to being an album that single-handedly makes a few more months walking around, half-squinting through sporadic snow blizzards, feel soulful, refreshed, and even sometimes kind of exquisite. It isn’t a mid-summer, feel-good beach party album, or a full-bellied catnap in the sun album…but it isn’t a bleak mid-winter album either. It is explorative, enchanting, wide-reaching, and so hopeful it ignites a tender pain all its own.