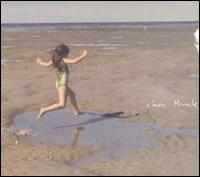 Hippies annoy me. White guys with dreadlocks, girls with too many piercings and too little politics, and anyone who loves jam bands. I had a roommate last year who put Phish posters around the room and enjoyed extended, sub-par guitar solos and bongos. Needless to say I made every attempt to stop him from figuring out how to work the stereo. Perhaps I’m threatened by their creativity, or maybe I just haven’t done enough drugs (yet) to appreciate the “subtleties” of their music.

One way or the other I had trouble bringing myself to lay down $15 for another CD from K Records. It’s not that K hasn’t had their share of greatness: Beck’s One Foot in the Grave is an overlooked gem and there are a few Microphones album that really stuck a nerve with me. All the same, there are plenty of bands in the K roster that seem more focused on just being sonic rebels than actually making good music.

Mirah’s C’mon Miracle isn’t standard K fare, though it’s not as though producer Phil Elvrum has sold out here either. There’s still plenty of expectation-defying production work, and Mirah’s scope of influence, especially the latin, is far broader than the average singer-songwriter type. Still, Elvrum really lets Mirah shine on this, and the strength of her songwriting, combined with the understated and well-matched production and arrangements allows this album to stand as one of the better singer-songwriter albums in some time.

The listener is immediately reminded of the strength of Mirah’s voice on the opener, “Nobody Has to Say,” where she sings with both a strength and depth of emotion over a track built on a string section and lightly picked ukulele. “Jerusalem” is a somewhat heavy-handed political track, but Mirah’s backing band is allowed to rock out, a trend that continues through the first half of the brilliant “The Light.” The song has a somewhat traditional rock feel to the first half (albeit with some unrecognizable instrumentation), but the quiet finish highlights the message of peace that the song delivers.

“Don’t Die in Me” doesn’t do much to distinguish itself, but the repeated drum breakdown serves the track well. Drums do much to define “Look Up!,” easily the most rock track on the album, and Elvrum uses his own sort of wall-of-sound effect to build behind Mirah perfectly. His skill with bizarre instrumentation helps with the second genius track on the album, “We’re Both so Sorry.” The track opens quietly, with Mirah crooning over a harp, but more instruments slowly work their way into the track. Elvrum double layers Mirah’s vocals a third of the way through the song and then for the last third a whole series of drum beats and glitches provides the background for Mirah’s perfect refrain of “I’m sorry bout so much baby, but I know you’ll understand.”

Mirah pulls in latin influences on “The Dogs of B.A.” a song generally about things going wrong. On much of the last third of the album Elvrum really lays off on the arrangements and lets Mirah’s singing talents and lyrics hold their own. The simple piano lines on “Promise” play perfectly off Mirah’s vocals, as does the guitar and ukulele pairing on “Exactly Where We’re From.”

C’mon Miracle is strongly deserving of the sort of accolades rewarded in the last few years to Iron & Wine, Cat Power, Fiona Apple, and in some ways even Aimee Mann. Mirah is able to bring a sweet voice, a great skill with writing, and indie-folk production values to a truly beautiful collection of songs about life, war, and love. If she is able to maintain this level of sedated seriousness in future works, Mirah soon could well be the benchmark for the female singer-songwriter crowd.