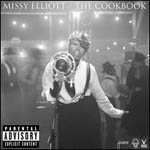 Is Missy Elliott even trying anymore?

Actually, that’s not fair. Of course Missy’s trying; she’s been struggling to kickstart pop music’s sorry stagnant state for six albums now. It’s almost a cliché to talk about her career as a singles artist, but fuck it: at this point, she’s on the shortlist for “best video artist of all time” after Madonna and the siblings Jackson, and her laundry list of year-defining, genre-defying singles is pretty much unparalleled by any other artist of the past fifteen years. When her greatest hits album comes out, I’m gonna just lose my shit and give it, like, a 94.

So, obviously I’m a fan. But as much as I love her, and as much potential as it has for producing a few more year-defining, genre-defying singles, The Cookbook is a lackluster effort, one that finds Missy resting on that heap of cultural superlatives and just crapping one out for the kids.

Like all Missy albums, the first five tracks are absolutely incendiary. “Joy” rocks a hyperminimalist Timbaland beat, with Missy spitting chill shit, hat brim pulled down so we can’t see her smiling. Slick Rick and Missy have a blast on “Irresistible Delicious,” trading verses and flipping Rick’s most indelible chestnut of misogyny. But the real banger is “My Struggles”: an ambling blues lick looped ad infinitum sets the “ya’ll don’t know my life” tone, Grand Puba dropping in to dub himself the “throwback cat” and talk some quick shit about the new school. This is Missy’s obligatory Great Album Track, where she drops all posturing, grabs a five-star MC and a slick beat and makes some heads nod.

And like all Missy albums, she makes even the most clichéd of guests sound good. “Gossip Folks” is still Ludacris’s most endearing moment, and Mike Jones should be thankful accordingly for his (are you ready for it, world?) actually pretty good verse at the end of “Joy.” Some chick named M.I.A. keeps up pretty well with the awkward marching band funk of “Bad Man,” and, while I’ve never heard of her before in my life, I believe she may be someone to keep an eye on.

But like all Missy albums, The Cookbook is filled with tepid pap, maudlin slow jams and faceless R&B starlets with names like Fantasia or Pangaea or Tweet. Fortunately, these are entirely concentrated in the second half of the record. Actually, let’s just get this out of the way right quick: you will never, ever listen past track eight of this album. Ever. I’ll exempt “Can’t Stop” from this hate-spewing, because that song was produced by Rich Harrison, who deserves a goddamn Nobel prize for the shit he’s doing with drums. But the musical wasteland that stretches from “Remember When” to the silly-ass sketch after “Bad Man” is almost unparalleled in its unlistenability--“unlistenability” obviously being a word that I just made up to describe how fucking awful the second half of this record is. I mean, seriously. It’s bad.

All Missy albums do this, and it always infuriates me. Because she has to know these songs suck. It’s the price we have to pay, I guess: in order to put out the best single of the year every year, she has to put out an album every year, and these time constraints show on the finished product. Missy’s rhymes show signs of wear, too. I mean, using candy as an analogy for oral sex was played out by the time Fiddy released “Magic Shop,” let alone “Candy Stick.” With The Cookbook’s much-touted formula-tinkering (i.e., less Timbaland) there was a chance for redemption after This Is Not a Test! bombed with critics and fans-maybe it was time for her to plant her freak flag on some new planet. But even with shiny Neptunes beats, The Cookbook leaves the exact same impression on its listener as every Missy album since Supa Dupa Fly. She may have changed the recipe, but the dish tastes the same. That’s the sign of a chef running out of inspiration.