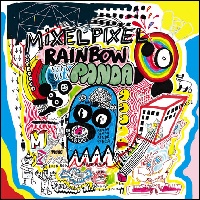 February 2004: Call Scratch Records in Vancouver, ask them “so what else is good?” when ordering a Devendra Banhart disc. Scratch says “What are you interested in?” I say, “That Cansecos disc sounds cool, ya heard?” They say, “yes,” to which I reply, “ok sell me it.” They do!

March 2004: Package arrives (it’s next month because I lived in Australia then) and I’m missing Canada a little bit right now and The Cansecos endear me because they have this line about how, “there’s fire in the hills of northern Quebec,” and I’m thinking about how it’s really still winter back in Newfoundland and New Brunswick and damn, hope the boys are doin' ok. Plus the disc is awesome, too, I’d like to add.

July 2004 #2: Start writing for indie stalwart journalist megalomaniac Scott Reid and his powerhouse impropaganda factory cokemachineglow. Write up the Cansecos disc because I’m still playing it even after five months and even though it came out in 2002. E-mail Canseco dude like “I liked your CD and told the whole world, love me back.” He’s all “________." Make note to become friends with Canseco man.

October 2004 #1: After bugging the shit out of Canseco man like, “you know any cool bands I don’t know about?” He’s all really nice and like, “My boy went to Pop Montreal and said Mixel Pixel finna blow up.” I say, “Gotta go,” and e-mail Mixel Pixel, who mails back as this dude Rob even though there’s also Kaia and Matty. Rob’s all like, “I heard about your site." I’m like, “You heard about CNN too, no shit.” But he sends me a CD anyway. He roX.

October 2004 #2: Rainbow Panda arrives in my mailbox and the artwork makes me squinty but I listen to it anyway. Rob is scaaaary. There is a sort-of dirty cartoon in the liner notes by noahlyon.com and he has a painting of Ronald McHitler on his website that’s also scary. Put CD away, have bad dream about Mz. Pac Man that night. Feel grown-up.

October 2004 #3: Wake up next day and instead of watching MuchMusic, and even though Xzibit is gonna pimp someone’s ride I put Panda back on again and like it despite weird Mz. Pac Man dream. First song is called “Pink Shirts,” and it’s about how he likes his girlfriend to wear pink shirts and how they go on big picnics (“I like to fill you up / Let the river run”). He sounds nice. Music is different. Has strange electro-pulsating feel that makes me feel like I’m back in that unchristian Mz Pac Man dream. Odd beeping like a heart monitor in background melody. Rob’s voice sort of faux-limey slimey/Morrissey Da Pimp and fuzzy guitars 007 you to death. Same with “My Animal"; grating string distortion on the verse and sweet harped-up, sparkly-chime hook: “When you call / It doesn’t mean much at all / But when we touch / It means so much.” Hmm. Detached or just randy? Bongos? Sure why not make new genre: Digijunglefunk. And on the next track (“Desert Falcon”) he samples the Atari game “Desert Falcon” which was FUN and overlays perverted monk chants on the bleepy melody. Overwhelmed, need break.

November 2004: Ok. So you subconsciously think Mz. Pac Man is hot. Get over it. “Holsters” calms me down a little; just acoustic and electric guitar and interesting one-liner: “Holsters got you to bolster your culture.” Hmm. Oh! America---right! Not sure dirty sweat-drenched Vice Party inside Tron is the right venue for political commentary but can’t fault the dude for diversifyin. “Psych Mo-Fo” has video game “Arkanoid” solo that is ridiculously hot with ball-breaking (yes, pun intended, sorry) in-your-faceness to match. Never thought sublime musical moments would spawn from Commodore 64 samples. Who knew. “Your #1” attempts to be annoying on purpose and succeeds. Punk vocals interspersed with digital gargling percussion and aluminum-siding / air-out-of-balloon crashes. Bad grammar in title. Nice guitar solo saves. Actually, 8-bit video-game-ripping tracks don’t deserve guitar solos like that. What a happy mess.

November 2004 #2: “Perfect Little World” is in the desert, underwater. Twangy country-blues guitar and deep-sea sonar percussion, and yeah here come the waves of faint organ. Damn. Again, none of this stuff has any business coexisting under the same track number but it all works anyway. “Body Automatic”? Yeah just because I like your record doesn’t mean you’re unforgivable. First hollow song is also the last. Easy fix: press stop early.

December 2004: Having trouble assimilating notes into a coherent whole due to album’s scatterbrain, widespread sonic panic. And scant mellow moments of calm. And piping guitar flourishes. And Pitfall samples. Deadpan seduction one moment, apocalyptic pop the next, first record I ever heard freak a Commodore 64 solo. First memorable anything solo I’ve heard in a long time. Can’t tell if he wants me to hug or goose someone or just call my parents and say hi. Oddly pervertedly romantic at times, friendly and familiar (Arkanoid!) the next, fantastic and organic and synthetic but never prosthetic. Not sure I know exactly how weirdly good this is. Must remember to include link to www.mixelpixel.com in the review I’m gonna write. Think he has new album coming out next fall. Apparently this thing took almost three years to make. 21 if you include video games. Ha ha. Don’t say that in review. Must figure out which song was inspired by Gainsburg (find out spelling). New project under name of “Eastern Stars” coming out soon as well as old EP. Wonder if we can use mp3 of “My Animal” in review. Will just upload and see if he says anything.