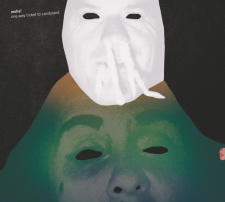 One Way Ticket to Candyland

Forethought, structure, and coherence come at a price for bands like MoHa!. The Norwegian spazz-rock duo have developed a sound that thrives on short bursts of energy. Like two boxers in a ring, the appeal was in the unpredictability of their attacks; you never knew when they would start pummeling each other and when they would step back and dance around.

Enter One Way Ticket to Candyland, for all intents and purposes the band’s prog-rock opus. Not that they’ve got any quieter, mind. If anything, without the constant pulling back of Norwegianism (2007), the album seems to be in constant assault mode, filling all the spaces with mutilated guitar, electronics, and drum fills. I can’t really fault the band for this new sense of tightness, which must be the inevitable result of finally sitting down and deciding just what this band is going to be about, even if the result is less self-assured. It’s certainly no insult that One Way Ticket brings to mind bands like Ruins, Melt-Banana, and Mr. Bungle, but it’s also true that these are bands that struggled to distinguish themselves and remained on the fringes of rock music.

One Way Ticket feels less like a record aimed at subverting rock music than taking it to its extreme. It’s an interesting prospect, to be sure, but in practice it feels suffocating at times. Whereas on Norwegianism the band made full use of the dichotomy between silence and noise, here they seem to want to blend the two together, which often ends up diluting the effect of both. “Too Smart Enough to Think” really does sound like a slowed-down version of Melt-Banana without the vocals, which bypasses probably the two most exciting aspects of that band. And “Aids of Space” makes good use of quieter moments but it’s still anchored by a few sludgy bass notes.

The band is definitely interested in using such quieter moments as more than simply a break from the violence as they had previously. This is most obvious on “The Shitman,” which goes from murky guitar/laptop ambience to Liars-style post-punk. The latter works surprisingly well, but the track as a whole has the direct opposite problem of “Aids of Space”: here it sounds like they crudely pasted together two radically different tracks. Throwing curveballs all over the place, as they have on previous records, makes for an invigorating experience; here the single curveball is way too glaring to be exciting over repeated listens. “Sopp Pa Kugen” flips the same script, fading their usual freakout halfway through to ambient/industrial pops that do get increasingly distorted and violent but never return to the its rhythmic origins.

Amidst questionable stylistic choices, however, lies the fact that these two guys still have incredible synergy. Opener “It Burns Twice” culminates in a rapid back-and-forth between the bass/drums and the guitar/analog noise, an exchange so taut that right off the bat it sounds like MoHa! are no longer in the spirit of doing things in one take. It’s the two-minute “Prog-O-Rama”—which sounds exactly as you’d imagine with that title—that really stands out here, though. All the old markers are here: explosive stop-start dynamics, a hundred rhythms going at once, and unlike most of the album it doesn’t seem to have a single center. The high-end squalls lead as much as the rhythm section, making it deliciously disorienting. It’s this spirit of harnessing chaos—as opposed to attempting to control or contain it—that MoHa! really excel at.