1. About Last Step and Scale
2. Lord, Am I Going Down?
3. Contour
4. Valla Torg Kraut
5. Oscillations and Tremolo
6. Ode to the Ode to the Street Hassle
7. Invitation to Love 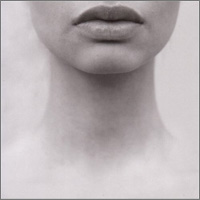 Like Liv Ullmann’s Elisabet in the Bergman film of the same name, Persona finds that the only genuine human expression is that of silence, of resisting the urge to create something wholly new and accepting the humble act of building atop previous achievements with machines developed by others. A big concern of electronic music throughout its history has been that the content will always be determined by the technology and, as a result, bound to its time. Mokira (Andreas Tilliander, another Swede) approaches this problem by reaching back into this history, making something that’s hard to pinpoint on one era or style.

The majority of Persona self-consciously mirrors this historical unearthing. Whereas Keith Fullerton Whitman’s Multiples (2005) traced the history of electronic music forwards, Mokira almost works backwards. The first two tracks, “About Last Step and Scale” and “Lord, Am I Going Down?” are murky ambient tracks not unlike late-‘90s/early oughties staples like Gas, Tim Hecker, or Fennesz. Even from the start, Tilliander is using all analog equipment—some Rolands, some monosynths, a bit of tape hiss—but employing it in a way which recalls more recent, layered ambient tracks. “Step and Scale” punctuates its monolithic waves of sound with lonely, metallic echoes in its second half. This leads perfectly into the second track, which finds the former’s more abstract tendencies reigned in with Basic Channel-type dub inflections, in what might be the album’s most gorgeous moments.

“Contour” is where the album begins stripping down to its more noticeably analog sounds: the synths pop and echo in a tightly controlled way like ambient techno but without digital glitch the music starts to recall krautrock a lá Cluster and Harmonia. The tribute becomes quite literal on “Valla Torg Kraut,” where the synths are finally playing identifiable notes rather than vast overtones and a distinct minimalist rhythm kicks in. Finally there’s “Oscillations and Tremolo,” which is exactly what it sounds like. Even if the track slightly recalls the more contemporary Spacemen 3 than say Silver Apples or Morton Subotnick, it serves as an appropriate climax to Mokira’s gradual pairing down to the simplest most rudimentary effects. At nearly ten minutes “Oscillations” isn’t the most immediately listenable track but it does have a zen-like quality to it, like the feeling Tilliander might be stepping back and just letting these simple effects loop on their own.

This admission of acting as a transmitter of music history rather than a fully independent creative agent seems to find its apex with “Ode to the Ode to the Street Hassle.” Here Mokira openly confesses his love of Spacemen 3 with a cover of one of their songs, which is itself a cover of Lou Reed’s “Street Hassle.” The original instrumental melody is still recognizable but Tilliander replaces Reed’s string section and Spacemen 3’s guitars with a cracking, decayed synth, as if the act of translating the song through multiple degrees of separation had itself worn the melody thin.

With “Invitation to Love,” Mokira finally returns full circle to heavily processed, aquatic beauty. And though Persona isn’t nearly as schematic as my reverse chronological description might suggest, it’s worth mentioning that not only does Mokira strip down his sounds in a subtle, almost sub-conscious way (breaks between tracks are almost indiscernible), he maintains a coherent take on different styles without ever fully submitting to one. With 2009 shaping up to be a year of phenomenal ambient records—including excellent contributions already from Tim Hecker, Alva Noto, Elegi, and others—it’s difficult to stake your claim with an album that can’t help but draw comparisons to other acts (yes, with some embarrassment I do realize I’ve mentioned twelve other musicians and one filmmaker in this review). Having said that, Persona is conceptually and sonically airtight, and for an artist who’s obviously open about not working in a vacuum, perhaps it’s only fitting that he’d find himself in the midst of this sudden resurgence.