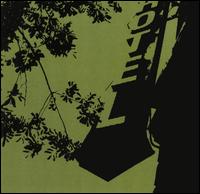 I’ll admit it. I’m one of those guys. You know the type. Those guys who can listen to bands like Sigur Rós, Godspeed You! Black Emperor, Do Make Say Think, A Silver Mt. Zion, Fly Pan Am, etc, at just about any given time, and not just in the middle of the night or while they’re sleeping. All you have to do is mention Montreal or Iceland, and my eyes are instantly glazed with an idealistic euphoria of fifteen-piece bands, ethereal tape loops, and walls of sound created by man and machine. I understand that this stuff isn’t for everyone, but if you dig it, then read on.

The Montreal post-rock sound dominates Molasses' Trouble At Jinx Hotel. That’s no surprise since the sprawl of Molasses is composed of members of other Montreal bands such as Godspeed You! Black Emperor, Set Fire To Flames and Shalabi Effect, amongst a few others. It wasn’t originally that way; Trouble At Jinx Hotel started out as a solo project of Scott Chernoff’s. The plan was to record a simple folk album using just some sparse guitar chords and vocals, but it eventually turned into an album that involved 16 musicians.

Critics may say that Molasses wasted their resources by having so many musicians, then making a really repetitive album. There isn’t a lot of variation from song to song, but I think the repetition is methodic. Trouble At Jinx Hotel, while it may be easy to dislike, is full of underlying qualities that can only be achieved with post-rock, especially when it’s of the melancholy variety. Mainly, those qualities are in the meditative state that ensues the beautiful melodies, the thick simplicity of all of the parts, but in this case, there are lyrics -- a Montreal post-rock anomaly.

Even with lyrics, however, Molasses wants their collective sound to be the focal point. In an interview with Wavelength, Scott Chernoff said: “People can be too quick to point to the vocalist or the lyricist in a band and mark that person as the center around which the rest of the band sits, and that’s just not an honest version of how Molasses makes its music.” Scott Chernoff’s voice blends seamlessly into the slow guitar/violin/noise based songs and is often harmonized by several other voices, never too far in front nor too far behind the music. Even the album credits avoid creating hierarchy; all 16 Molasses members are given the simple title of “musician.”

However minor a role the lyrics play, it’s hard not to notice that they are presented beautifully, making even the simplest phrase into poetry. Scott Chernoff tends to gravitate toward the abstract, mostly singing about personal trials and political discontent. The repetition of the line “Old man you can’t win” in “Lynn Canyon Wedding Song,” a song with about the same feel to it (as far as lyrics go) as Pearl Jam’s “Sleight Of Hand,” makes it the most stand out, mix tape worthy track on Trouble At Jinx Hotel.

There are other displays of good lyricism to be found. My personal favorite is the revision of the following poem, taken from the Statue Of Liberty: "Give me your tired, your poor/ Your huddled masses yearning to breathe free/ The wretched refuse of your teeming shore/ Send these, the homeless, tempest-tossed to me/ I lift my lamp beside the golden door." In this time of intense political strife in America, Molasses appropriately anthemized the poem: “We’re tired, Mother, and we’re poor/ We’re wretched at your teeming shore/ We’re homeless and tossed by the storm/ Looking for the light at your golden door.”

It’s true that most people have gotten so fucking sick of post-rock by now that they’d rather (insert painful/disgusting/humiliating situation here) than listen to another album from the genre, especially when it has anything to do with politics. All of which is, of course, understandable; repetition is not for everyone, and that’s why Trouble At Jinx Hotel is going to be an inessential special interest album -- one that, I should add, I feel like I probably won't be listened to very much a half-year down the road. But for the introverted -- those who refer to themselves as “wordsmiths” as opposed to “writers,” anyone looking for a one-up on that other music-snob who lives down the hall -- or the few of us who are have not yet had enough, this is another fine addition to the genre we refuse to give up on.