You Are There
1. The Flames Beyond the Cold Mountain
2. A Heart Has Asked for the Pleasure
3. Yearning
4. Are You There?

Other Records by Mono / Mono and World's End Girlfriend 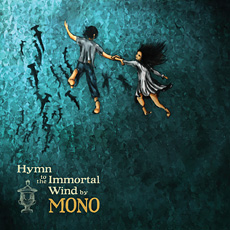 Mono: Hymn to the Immortal Wind

I forget where I first heard the appellation "nu-instrumental," and I've yet to decide whether I find the term offensive or fitting. Nu-instrumental, or course, refers to third-wave post rock, bands like Explosions in the Sky, Yume Bitsu, Pelican, and Tokyo's Mono. Generally speaking, they eschew the first-wave's tastes for jazz, avant-garde and Kraut influences (think Gastr-de-Sol, Tortoise or Labradford) for the more delicate slash bombastic sounds of the second-wave (Mogwai, Godspeed You! Black Emporor). The pejorative moniker is an obvious allusion to its mainstream counterpart in nu-metal; bands that are watered down versions of immediate influences (both musically and contemporary) that attract undiscerning, uncritical, and downright idiotic audiences. In a word: teenagers.

It's offensive because I love, in a capital L gushing teenage way, all of those bands. I also don't feel any intellectual guilt or shortcoming that I can recall from memory all of Pelican's The Fire in Their Throats will Beckon the Thaw (2005) but I'm hard pressed to tell you how a single Labradford song goes. I recognize it's fitting, too, but I like that the music appeals to the teenage mind over the trainspotting, encyclopedic, critical one. Perhaps it's an affinity I share with these bands: it's no secret that Young Team (1997) owes at least as much to Siamese Dream (1993) as it does Spiderland (1991) and Loveless (1991). That's why it's so great, and these bands -- Mono, perhaps, chiefly among them -- seem to understand the unbridled aiming for the rafters, those roaring guitars playing the big shiny major chord in "Summer." The world feels like its caving in, or like you're exploding into space, or both at once: "it's bigger than words, and wider than pictures, um." The third wave has some song titles that paint with a broad brush, but that's part of its teenage appeal. Yeah, the fires are exploding in the gray skies beyond the cold mountain and the floating spirits of the other world swoop down in our hearts or whatever -- fantastic! How much more teenage can you get? By which I mean: how much more rock can you get? Life is dramatic when you're fifteen, and no one understands you, you are a caged animal, you want to set the world on fire. Bring in the big guitars!

Enter Mono, who bring in the many delay pedals. Mono has assigned their name to two records which may well find deserved places among the year's best. The first is their fourth long-player, and second recorded by Steve Albini, You Are There, released back in March. Listening to it two dozen times, as I have this season, one is reminded of something Tom Waits' wife is quoted in regards to his husbands work: "Tom has two kinds of songs: Grim Reapers and Big Weepers." You Are There has similar themes, only it's all together at once: the minor stomp of "The Flames Beyond the Cold Mountain" has a harsh, dissonant melody that lends weight to its requisite crescendo -- to wit: eight minutes to build from whisper to feedback, then another five to reprise. Likewise the three distinct sections of "Yearning" lead not so much to an explosion as a sustained wail. One is free to imprint whatever they wish on instrumental music (that's the best part about it -- the records contain the boundless passion and fury of teenage poetry without the triteness and self-centeredness, which is to say the words). If you're like me, you can say it feels like grief, the pain of loss coupled with an extraordinary sensory overload, but it's all insular, detached from the outside world. Maybe you think it's an elvish cookie recipe. Maybe the band thinks it's F minor to Bb major for fifteen minutes.

The second record is a collaboration with a Tokyo artist named (lower-case letters in a proper noun alert) world's end girlfriend. Palmless Prayer/Mass Murder Refrain is the Godspeed to the Mogwai of You Are There, and is the more interesting record. It certainly boasts the most interesting title, suggesting a kind of cruelty new to the genre, although the music is more delicate and outwardly beautiful than the band's own effort. The album's five songs feature no titles and while the band sounds true to its crescendo loving, epic rocking form on parts 3 and 5, the music is more deliberate, with an emphasis on piano and cello. To the best of my knowledge, there are no other world's end girlfriend records domestically available; I'd love to hear others, because his influence on Mono is vast on this album.