Other Records by Montag 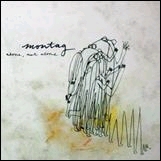 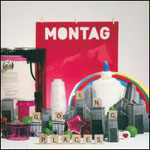 Canadian Antoine Bédard's latest album, Going Places, is undeniably pleasant, in the way eating an ice cream cone or watching lightning bugs on a summer night is pleasant. On one hand, it's a strength that the album suggests such satisfying, physical sensations; Bédard's delicate blend of organic and electronic elements (as well as his limited vocal range) give the album's bubbly, electronic pop a nice sense of warmth and humanness. On the other hand, its "pleasantness" evaporates immediately afterward, a momentary pleasure, recorded ephemera.

Bédard's work as a producer and composer is ultimately more compelling than the lyrical content here, which is as touching in its honesty as it is obvious in its themes. Working within two genres that lend themselves to cliché (bedroom pop and electronica), the album strives to confront not only the question of "what is love?" but also "what is human?" and "what does it mean to make music?" Yet even in the bleakest, loneliest moments on the record, it's hard to feel totally exasperated; Bedard's answers are always complemented by an inherent love of his art and a sense of inclusiveness.

Structurally as well as thematically, the album revolves around a type of trilogy surrounding the issues of "love" and "sound": opening track "I Have Sound," album midpoint "Safe in Sound," and the closing title track which includes material from a collaborative project called "We Have Sound." As the titles suggest, Bédard often positions himself and his relationships within his identity as a musician and his fascination with soundscapes. The album, in many ways, follows the course of a relationship, moving from celebration and confidence ("Best Boy Electric" is an exuberant love song) to uncertainty and despair. These three songs illustrate that trajectory.

The opening track, a kind of long introduction, suggests that sound is both omnipresent and supercedes all other needs: "We have no time for life / But we have sound." "Safe in Sound" is the album's catchiest song, and the sweet vocals lent by Amy Milan capture the willful disillusion of the main characters. "Answers will come," she sings, "but if you don't believe it just pretend." In the closing track things have seemingly slipped even further away, with Bédard abruptly ending a plea to a lover with "oh nevermind." Joy and urgency have been replaced by futility, something suggested by the dense montage of found sounds that clutter the song's middle, only to slowly fade out. (The sounds were a response to a request Bédard sent out; he received over 70 samples and all of them are somehow included in this song).

Ghislain Poirier's beats are characteristically solid on "Alice," and Final Fantasy's Owen Pallett contributes vocals to "Softness I Forget Your Name, a short and brutally sad duet. Even for it's weaknesses ("322 Water," "Hi-5 Au DJ," "Hands Off Creature"), the album feels fresher than other recent collaboration projects, notably Dntel's Dumb Luck (2007). Bedard's production makes the guests feel essential rather than tacked-on, and his sentiment makes them feel connected, even when they are emotionally distant. At times sappy and at times sentimental, it is also a group therapy dance party to which Montag has graciously invited us all.