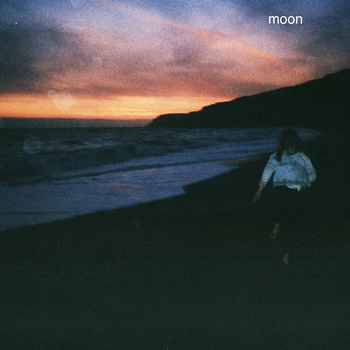 It is a light-flicker both petite and peculiar that licks through this dreamily rendered, lo-fi EP from Brooklyn’s Moon. Comprised of four soft-focus songs and a purely instrumental field of noise (with the single iTunes embedded lyric: “spaaaaaaaaaaaaaace”), Guilt is crafted by confession-driven soloist Alanna Nuala and left to hang somewhere in an unmistakable “chillwave” nebula. Hers is a voice that’s uniquely remote, touching—despite its distance—and half-haunted by an awareness of that distance, even as it’s pulling farther away. And Guilt, Nuala’s third project under Moon—released just shy of a year after full-length The Light (January, 2011) and a collection of songs penned during her later high school years—casts itself off into the distance not only in an lyrical way, but sees Nuala’s aesthetic pulling back from derivation. Namely, she begins to pluck away the scaffolding erected by prominent influences like, most obviously, Phil Elvrum.

Having performed with A Place to Bury Strangers, and having opened up for the Pains of Being Pure at Heart, her album is spluttered with traces of their digitally sensitive ilk. It’s Elvrum, though, that’s got his fingerprints marching up and down Moon’s prior projects. And once the connection is made between the two artists, it’s difficult not to begin seeing it in everything—“Moon” itself seemingly a snatched image from the Microphones’ catalog of recurring symbols. The barely-held-together ambient noise-making; the vocals, which are strung across the songs in The Light less concerned with a sense of compositional boundary; and even the album art, which was provided by Elvrum himself: all of it bears the fingerprints of lo-fi’s greatest manifest attempt at defining the term.

In Guilt, these influences have dispersed, diminished to bare hints, like in track titles “The Distance,” “The Guilt,” or “The Blizzard” that merely smack of likemindedness, a semblance of the experimental soundscapes and those traces of almost embarrassing sincerity. Nuala’s songs share a lot in common with the lyrical purging of not only Elvrum but Carissa’s Wierd or even EMA, their girthy, emotional heft all “I want to cut out the part that cares,” which is something Nuala whisper-mumbles into her Explosions-in-the-Sky-like atmospheres. Of course, these atmospheres build, but in such attentively rationed portions their execution actually saves them from a spotlight which would just reveal them as trite (and, in places, they kind of are).

As title track, “The Guilt” opens the album with an immediate impact of delirious swells of synth and Pains-of-Being ephemera; it stands as the track with the most to sink into on the album, and it’s only the beginning. Here she releases the first of her fakely innocent but earnest confessions: “I don’t…want to die.” Guilt is not all sad ballads, though. What I assume is (preciously enough) a tribute to her (awesomely named) cat, Banjo, “Banjo & Me” splays plinking, bright harmonics over a sleepy tambourine jangle. Breathy vocals chime in, pushing through the ambience, only to dismantle into loose and deteriorating clusters. But building buzzes soon liquesce into slo-mo tracks like “Ghost/Light,” where Nuala hits on occasional off-notes, creating a cathartic hush-hush of words. “I can’t breathe,” she says. They’re lyrics that, surprisingly, hold their own in the trail of guitar that begins slipping into sheathes of sound as smoothly as someone inserting bones into a corset.

Despite being saddled with a name like some dewy-eyed Tolkien elf-maiden or Disney lion-princess, guaranteed to raise the hackles of those who openly decry the chillwave genre, Nuala manages a deft and engrossing fraction of an album-to-come. Guilt is all experimental, static-infused gestures that are delicate, diaphanous, but caught in a current with enough muscle and momentum there’s little about the songs that waffles or feels washed out (natch). While not being too precious with itself, Guilt careful with its imperfection, and may be the best we currently have in getting a grip on lo-fi in a post-Microphones world.