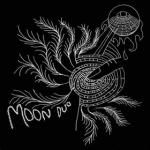 San Francisco obviously-two-piece Moon Duo (one half is Ripley Johnson, who’s also a guitarist in Wooden Shjips, the other Sanae Yamada, keyboardist) describe their music as a “primordial and disorienting sonic stew.” That’s a cue to roll eyes; a recipe for tedium. Often, when it comes to a series of mostly instrumental, neo-psychedelic guitar jams, the harder a band tries, the worse the results. How long is too long? How sludgy is too sludgy? How repetitive is too repetitive? And if said band decides to aim for a broader audience that subconsciously equates “stoner rock” with Phish, a series of mostly instrumental, neo-psychedelic guitar jams has to transform the worst excesses of a hashed and rehashed genre into strengths: repetitions must become hooks; tempo shifts must tell stories; hazy ambience must be a starting point, not an end result. You can play loud: awesome; now let’s see you play interesting.

On Escape, Moon Duo make a case for both. The driving setup to “Motorcycle, I Love You” is actually an excuse for a five-minute face-melter that alone justifies the record’s existence. It ebbs and flows (mostly flows) over a four-note syncopated bass line, major solo crunching against minor hook. What this has to do with motorcycles I have no idea—maybe it’s about chasing the sun on a deserted west Texas highway or running from the cops through the East Bay hills. The arpeggiated solo of “In the Trees” floats over layers of wavy distortion while the burgeoning haze of “Stumbling 22nd St.” calls to mind either your own drunken escapades or those of people cooler and more fucked up than you. The entire album is a kind of hypersensitive Rorschach test: with no intelligible lyrical guidance and a familiar aesthetic, blanks are filled by experiences greater than your own—the more fantastical the better. For all the incapacitated pretensions, though, “Stumbling” also has one of Escape‘s more conventional backbones, a luminous, undistorted organ lick the likes of which have sounded from garages for decades, in turn keeping the track centered until the unavoidable blackout: the heartbeats go on until, just then, they don’t.

The pacing is nearly perfect. Escape‘s most impenetrable drone follows its craziest guitar solo before starting over again at a higher pitch. Track times descend by 30 seconds apiece as the record ascends tonally, rising in tempo and brightness after the temporary comedown of “In the Trees.” Each track sets up a guitar freakout with anticipatory vocal elements ranging from echoed whispers to soft croons. And then after a concise 30 minutes, all wraps up gracefully with a soothing, almost pretty counterpoint to the debilitating ostinato of “Stumbling”: “Escape” sails along with a sunny Yo La Tengo melody and high-range guitar line that plays off swirling streams of echo and feedback.

Despite Moon Duo’s obvious genre touchstones and self-described sound, the one thing Escape consistently dredges up in my mind is San Francisco. Each spin has contributed to amorphous, sweeping generalizations about music and place: how successful revivals have to emerge from their original sources; how New York was destined to become the center of the indie universe as post-rock took over and disco and punk merged; how the Bay Area, maybe even California as a whole, was inevitably left in the dust. When I lived there in 2006 and 2007, the streets of North Beach and Haight-Ashbury felt like museum pieces; beat landmarks City Lights and Caffé Trieste have become tourist traps and the Haight’s cultural center, Amoeba Records, is surely on its last legs along with the rest of the brick-and-mortar universe. Even the Castro is losing relevance as gayborhoods price out gays and politics make ghettoized lifestyles obsolete. For God’s sake, DJ Shadow released a hyphy album. But where New York was poised to build an entire decade on “Losing My Edge” and Is This It (2001), the garage/psych aesthetic is in the Bay Area’s blood. It’s premature to make a case for San Francisco as midwife for Moon Duo—the context needs time to assert itself and I don’t know what’s going on in Ripley Johnson’s head—but Escape just may be the beginning of a renewal of California hard rock…or the apex, or somewhere in the middle. What matters is that there’s much more to come.