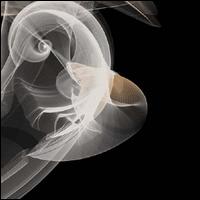 Packard’s bio—in what might be a first for press bios—is actually kind of funny, especially where it says he starts out with a loop and then attempts to “subtly disrupt the ‘loopness’.” “Snerk,” sure, but also not a bad description of what’s actually going on with the tracks of Airships Fill the Sky. The title track, for example, does manage to capture that trope-ic Japanese vision of the European industrial town fostered where the beauty of cobblestone and colloquialisms are never marred by steam and labor even as airships fill the sky above them. Is that the reference? Who knows, though it’s hard to believe kids of our generation not being at least casually intimate with at least one Square RPG, and that raspy accordion and the waft of obscure metallic and wood kafuffle that swarm around the two-chord beat certainly suggest a kind of old-Europe arcade glaze. Which makes it sound simpler than it is, because the trick is the way Packard tends to yank the more esoteric noise into line to hum along with the pulse of a traditional dance center. Zeppelins eclipse and crash; airships ripple serenely overtop no matter how clangy their engines get. The loops align and dissipate but they never rub too much against one another.

The smoke-ring crustacean constellation on the cover of the album is again about loops; they splay out across one another. It’s these intersections that Packard is aiming for, and even if the basic ambient or house maneuvers he pins them down with aren’t always the most refined, it seems they’re specifically cut that way; sharp, clear edges in a dense fog of sound. Then again, tracks like “A Place Worth Keeping Part 1” and “Dappled” do show a more developed approach to beats, even if Packard is at his most (traditionally) creative when he’s at his most ambient. Even a track like “Kelp Sway”—the title figure the drifiting husk on the cover, I presume—where the track threatens 20 kinds of awesome dance breakdown swagger—the tone is kept light and thin, too entranced with its own beauty to truly move a dance floor but all the more attentive to minor shifts and accents for it. Remix this shit, somebody, but keep in mind exactly why this original is so simplistically awesome: every melody is a cursive loop that spells out the melancholic direction the rhythm takes.

And, I mean, it’s that tension between lulls and leaps that makes Airships Fill the Sky so appealing anyway. “Waterbugs” slows the album down to a “How Dare I Be So Beautiful?” crawl before presenting the most upbeat and present tense techno track of the album, its melodies a wash of resonators spilling from the clipped drums. The ever-present loops of noise still faintly play in the background, but the focus here is on the funk. “I Think I,” though the beat is like industrial music blurred into submission, is tantalizing for reasons I can’t quite explain; I can say that what seems like overly long intervals between the hits had me filling in the blanks. “Mink Hills,” the saddest track on this sad album, actually features some gorgeous string quartet melodies as the percussive noise that pulls things along elsewhere is here employed for accent and color. I love the places where Packard throws that wobbly wood blockish noise under the end of the melodic lines. “They Will Rise Forever” closes the album on a similarly introspective note, this time brimming with hope as Packard wraps a beautiful stereo beat around simple melodic phrases. And again, while the beat isn’t immediately exciting, its restraint fits perfectly into the folds between melodic intervals.

The DVD that accompanies the disc, Unsimulatable, is a collaboration between Packard and artist Johua Ott. The two men have performed live together over the past two years, Ott employing a homemade software program called superDraw. The music is different than what appears on the album; the DVD actually contains a live set the two artists performed in one sitting with no editing. It’s interesting, although I suspect the visuals work far better in a live setting than they do as accompanying visuals at home, if only because the visuals themselves are abstract and can get repetitive. However, even if the DVD isn’t a profound addition to the album, necessarily, it certainly provides an interesting view into the thought process of the two artists and the aesthetic they’re trying to create. And it does lend some weight to my own feeling while listening to the album before viewing the DVD: Packard makes music like the album is just a microphone spinning through clouds of different noise; we’re on some linear (or looping) line that picks up fragments where we can get them. It’s a fascinating experience.