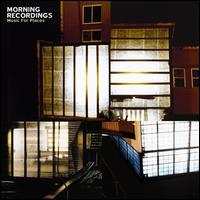 Albums like this are just begging for generalization. They actually call one of their songs “Let’s Get Quiet,” and, I mean, at least Eno had the courtesy to affix his ambient discs with actual locations. Morning Recordings’ debut may be calm, hushed, and all sorts of other bedtime adjectives, but it’s also got hooks, soft and padded as they may be.

Music For Places is deceptive, the kind of album that fades in and out of your aural cavities until repeated listens reveal something worth sinking your teeth into. Take “History Between Us": eight tracks deep into the album, it’s almost five minutes long and begins with some ambient noise and an acoustic guitar relegated to the right channel. But wait! Some thirty seconds in, the introductory fog evaporates to reveal electric guitar chords and an uneasy melody. The lyric is standard folk-singer melancholia, with the dimension of loss expanded by a mournful flugelhorn: “And when you’re driving away, would you ever look back here / ’cause what else have you left behind? / What else have you left behind, besides some history.” Pramod Tummala, the force behind Morning Recordings, seems less concerned with the answer than making some pretty songs out of it, and it's just as well.

Tummala’s page on the Better Looking Records website makes a big fuss over his host of accompanying musicians, and Music For Places does sound suitably lush. “Your Light Has Never Shown” plays around with multi-tracked vocals as well as evoking a hazier Autumn Defense, and album closer “Can’t Help Fading Away” does anything but, reaching crescendo with a rare cymbal crash. Musical adornments abound, from the omnipresent vibraphone to the murky harmonium that anchors (Music For…?) “Airports.”

The album contains its fair share of instrumentals, though their linear, evolving nature belies any potential Eno tribute. “The Lake Pt. 2,” with its hissing static and meandering electric guitars, sounds more like a Yo La Tengo segue than anything else. Or would, I should say, if not for the unlisted, mysteriously Eastern-sounding instrument thrashing about. “Intro To Fading” is a tentative string setting with a rhythm section that starts and stops at will. At times, the instrumentals are more adventurous than the actual songs, and one wonders what someone like Max Richter would have done with this material.

Morning Recordings began as a break from Tummala’s “real” band, Melochrome, but Music For Places has already carved out a fresh identity for him. Just keep your head off of the pillow long enough to notice.