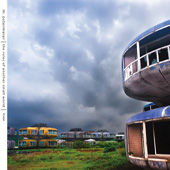 The Rules of Another Small World

Ten years ago, there was a very, very brief phase where a group of undergraduate scientists championed a new genre of music: “micro-ear,” or “lab technicians use optical tweezers to amplify the sounds of bacteria.” Consisting of nothing more than a slow, ambient slurping, micro-ear thankfully vanished overnight, slightly outliving the tubes of protozoa that the techies had connected to the Marshall.

Marc Ostermeier must have been studying at the same campus, because his self-described skeletal piano melodies are crawling with the sound of undiscovered organisms. The Rules of Another Small World, his third album in just over a year, deserves a trophy for most appropriate title of the decade: 37 minutes of orchestral minimalism, it shifts and crackles like alien vegetation, but one whose home planet is so delicate that cell division is the loudest sound imaginable. One sneeze, or one drum beat, and it’s curtains. The closest thing you’ll get to a chorus drop here is waves of brushed xylophone chimes, or the steady click-click-click of a typing pool. And, of course, microbe noises galore: “Streambed Arrangement” is where they first show up, where a classical soloist competes with enlarged bacon. This odd but delicate balance becomes a running theme on the album, and Ostermeier’s keen to make sure his ambience never outshine his actual instruments—a kind of anti-Type Records production method. It’s a soft, organic way of getting your attention, and if you own a boat, or have another legitimate reason to combine whalesong with cocktail chimes, The Rules of Another Small World could be your getaway record for the summer.

The only place it falls down is its predictability. Despite the double intrigue of chill music being fused microscopic field recordings, The Rules‘ moods seem a little temperamental, presumably to try and captivate those who like fireworks, and not just those who want to pretend they’re in the world’s most exclusive elevator, enjoying in the world’s most exclusive muzak. “Ngth”‘s rapid switching between thick fuzz and a scraping noise is about the closest you’ll get here to a drum beat, while “I Took Out Your Picture”’ incorporates oboes that sound so deep the instruments must be over eleven feet long. He’s dead now, so I suppose I’ll never get to experience the sound of Liberace being drowned into quicksand, but Ostermeier’s saved me the effort of imagining, having concocted it along with loads more sonic oddities. “Fast Darters,” for example, gets interrupted by a cat cautiously exploring the piano. Kitten fanciers might like to note it keeps coming back to the high keys.

When it comes to sustaining a feeling of overall enlightenment, The Rules of Another Small World is a victory. After all, there’s only a few tracks here where the gently thumbed harps/lightly sprinkled piano scales grate, and feel out of place being layered over synthetic molecule sounds. But that’s only looking at things close up, and if you move back a little you can see the age-old snag on this record as well as countless other minimal-ambient opuses: it all sounds so damn indistinguishable, and non-submissive minds will wonder, if not flee straight away. Tracks like “Retreating Night” may be able to out-atmosphere Jamie Woon (though with drops of water in place of the Timberlake vocals), but most casual music fans will abandon The Rules, as taken by Ostermeier’s delicate expanses as a backpacker is by an ice floe. For those partial to expanses, or stringed instruments, or fuck-off sensitive headphones, The Rules is going give you some commute music from heaven. It’s got to be something entering a city with the sounds of crinkling micro-organisms in your ears. Even if you run out of patience, you can still beatbox in some 2-step beats and pretend you’re listening to unplugged Burial.