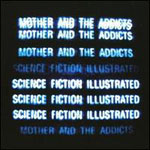 Mother and the Addicts

What's in a name? Why would Kaiser Chiefs name themselves after a football team? Why did the Pixies choose such a cutesy name? Why did the Silver Beetles drop their first name and did that help them become the biggest band in the world? And why would Sam Smith of Mother and The Addicts demand to be called Mother by everyone except his own mother? There is definitely no lack of self-belief in tagging yourself with such a powerful word as "Mother." You think of birth, creation, home and comfort. It seems pretty damning in comparison to sully Peter Valley, Ian Cronan and Douglas Morland with the dirty, fidgety, unsatiated, hungry "Addicts."

It is true that Sam Smith writes most of the songs, plays the majority of the instruments and on "The Wild" he is the only member of the band actually playing. Maybe the despotism shows Sam to be more like Joan Crawford than Ma Walton. Still, if the kids are running amock, someone's got to keep them in line. 2004's debut Take The Lovers Home Tonight was a messy garage rock dirge that began at full pelt but started running out of steam by the fourth or fifth track. On Science Fiction Illustrated there is a glossy production sheen that nods more towards fellow Glasgow art-crowd band Franz Ferdinand than labelmates Arab Strap. Interestingly, he hasn't mined the same, and now exahusted, post-punk reference library.

Science Fiction Illustrated genre-hops haphazardly between Soft Cell's DIY electro-pop and Orange Juice's guitar jangle via John Cooper Clarke. "Going Native" has a similar Doors-infatuated drama as Echo and The Bunnymen, "Are Others" is Blondie's new wave disco and "Roll Me On Over" is a slowed down version of The Damned's "Smash It Up". However, as each song ping-pongs back and forth through the years and styles fatigue begins to set in. Most of this is due to Smith's overbearing personality and habit of aping other singer's vocal styles with the sort of affectation that probably led him to call himself Mother.

He sounds like Jarvis Cocker on the suspiciously Pulp soundalike "So Tough," he is Phil Oakey on the electro-pop of "Watch The Lines" and, most bizarrely, Bryan Ferry on "Roll Me On Over." Undoubtedly the intention is to marry the vocal style with the different genres but it just sounds fractured and as though they are covering someone else's material. Obviously, with so many punches flying in so many directions there are a few that actually land.

"All In The Mind" uses a chugging bass and the same propulsive acoustic guitar as Bowie's "Move On" to wave a dismissive hand at the futility of hunting for sex. "He's looking for innocence, she's looking for another ride, can't you see it makes perfect sense, it's all in the mind" this is delivered with appropriate disdain and vective. "The Wild" is a sprawling Suede pastiche with hushed acoustic tones married to lolloping drums, building in with organs and the trademark crashing guitar chords. The playing is not as fluid and the drama not as intense but within the right hands would have been perfect on Dog Man Star (1994). However, the slight clumsiness adds to the charm. The artifice and showmanship are stripped away on this suitably elegiac album closer. It's a shame this honesty is missing elsewehere.

Overall, it's frustrating to be along for the ride while Mother and The Addicts try to find their voice, it feels too much like a work in progress. This makes for a confusing listen, but although there are times when Smith's need to show diversity borders on the compulsive it is refreshing to see someone working with different influences. For that alone, maybe Mother does know best.