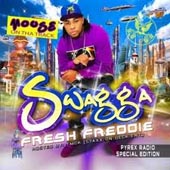 There’s certainly some bone-headed audacity that comes with showing up to a vegetarian potluck with a fat ham. Mouse on tha Track’s Swagga Fresh Freddie is the ham; the vegetarians are anyone with taste. Because Mouse on tha Track is a stupendously stupid moniker, and the album art on his stupendously fun mixtape looks like gasoline-colored vomit from the future. Similarly, Freddie enters one’s universe in much the same way alcohol does: it’s hard to stomach, it’s free so I don’t predict myself enjoying it, and when “Unwind” is, like, the best thing you’ve heard all week or “Bizness is Bizness” is silly infectious and the track with Soulja Boy on it is pretty great, it’s a shock to the system.

The problem with a lot of mixtape rap is that it aims for menace and just ends up silly; the archetypal gun-talker—with his name spelled out in bullets on the front of his tape, screaming horrendous shit all over chintzy 808 beats—is so ludicrous he usually becomes an object of fun. Remember how The Office‘s Michael Scott thought the most compelling thing to do in every improv sketch was to pull out an imaginary gun? Most mixtape gangstas agree. Gucci Mane and Cam’ron are examples of two rappers who have transcended the trappings of these tropes, largely because of their goofy senses of humor and perverted grasps of language.

Anyway and fortunately, though Mouse on tha Track is no wordsmith, he’s more about the party than the criminal element. Due to this lack of desire to convince the listener how many bodies he’s racked up, he can devote his energies to creating slinky club rap and lacing those beats with all sorts of giddy swagger. In fact, Mouse seems unconcerned with much of anything besides buying the bar a round of shots and bouncing around like some over-caffeinated kangaroo. He hints at gangsta clichés here and there, but when he does he’s so bereft of seriousness it’s obvious he could give a fuck about the believability of his boasts. About hustling, he raps, “Like Bill Cosby, I just want the bread pudding,” impersonating the sweater-clad sitcom star. While other emcees preen, stiffening their jaws, Mouse is in the middle of the dancefloor, straight clowning. Every party needs its drink-stirrer.

Mouse is as good a drink-stirrer as any. If your ordinary mixtape trapper lazily leans upon testosterone and anger, Mouse is souped up on the most amiable of enthusiasm. He produces everything here save for a few radio remixes and a beat from crony Q-Red, his compositions reminiscent of the buoyant, shimmery work of Mannie Fresh. The title track is all deftly interwoven keyboard plinking, high-pitched horns serving as exclamation points to the bleating heft of the track; “Turn the Beat Up” is nauseous kinetic energy. Synthesized horns swerve all over the place as Mouse babbles delightfully about party-starting.

I use “babble” because, as Mouse might readily admit, his raps aren’t really about anything. Mouse shines; Mouse hits the bar; Mouse is ‘bout to tear the club up; mostly, Mouse careens around his productions with fervor. He is of the rapper/producer variety that does not domineer his beats, electing instead to splash his voice into and over his productions unobtrusively. Mouse’s raps lend his music a face and a few flourishes in lieu of flashy punchlines…or, really, anything genuinely substantive.

While Swagga Fresh is sort of essential in that it provides a refreshing counterpoint to the violent stylings of, say, Guntalk or Lil Boosie, it needn’t be an hour in length. The act wears thin after a bit; poor Mouse is unable to completely hold our attention for the duration of the tape. Though he possesses an undeniable charisma, he can only unfurl so many flows before the latter portion of the tape descends from pinnacle-level club stuff to middling bottle-popping fodder that could have come from just about anyone. He also could have left the “Black and Yellow” beat alone (everyone could have left that one alone, actually). Swagga Fresh is, for most of its runtime, uncomplicated sonic joy. It contains a lot of tracks that are perfect for the moment at 1:30 AM in which a party switches its mood from “tipsy” to “liquor-soaked.” Seriously, throw on “Why They Jock My Style” and watch the asses move. Just don’t get let anyone know they’re bouncing along to a Soulja Boy verse.