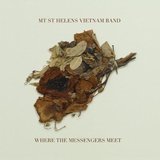 Where the Messengers Meet

Mt. St. Helens Vietnam Band is an uncomfortable name to stick to a band, as loaded with portent as it is dung-ugly. Not a pretty business, this judging band names without context, I think, but it’s important work nonetheless. For example: from what aural spring does such a band name dribble?, we should ask. It doesn’t roll off the tongue; it’s acronym doesn’t spell a cool secret word; it is geographically wrong—like immorally wrong, or so it feels when I say it out loud. It is a band name that has no flow, no pleasantries, no cadence, just bleak punctuation and the burping sub-sound of death. It implies violence and destruction and long, guilty aftermath—no, more than implies: it states such realities plainly, mushes together the images of trees engulfed with flame with young people murdered with the rounded top of some piece of nature that was bound to end up that way; it feels both unoriginal and necessary. My Penis Is Made of Dogshit, you only wish your moniker seethed like this.

And so the Dead Oceans debut from a band whose name reeks of decay turns out to be a pretty, austere, unexceptional little folk-rock album. Yeah…: Where the Messengers Meet is not exceptional. It’s built of guitars that build, cymbals that roar, aleatoric crickets, a thirteen-year-old drummer and his adoptive parents who tour with Frog Eyes, violins; its pieces are stock and its gimmicks clean. Each song is usually as good as the one before and/or after it—some contorting, some simply ascending, and some just burning, slowly. Where the Messengers Meet is hardy, familiar stuff, bread and butter post-rock for people who steer clear of hyphenation.

The above rating could alone describe the album’s first three minutes and sixteen seconds, so devotedly do those minutes and seconds close in on the heart of Mt. St. Helens Vietnam Band’s sound. From fiery guitar wails to the faint smell of burning passion to, just to be sure, the word “fire” croaked desperately, “At Night” assembles obvious piece by obvious piece, all the obvious pieces high-fiving at the song’s climax in sheer celebration of earning their spot on top. But “At Night” is also an exhilarating song, indulging each dynamic skid and ambient breath to flesh out huge, quaking emotions. It helps that Benjamin Verdoes sometimes comes across like a drowning Jeremy Enigk or a Cedric Bixler-Zavala that has to pee.

“At Night” demonstrates about how loud and how soft the band’s music can get; it begins with crickets. Last song “George Clark” demonstrates about how soft and how loud the band’s music got; it ends with crickets. And so the album rather overtly flips on itself, the wheel spun once again, guitars set to climb the same slopes, female vocals set to counter the same unnerving dude-yelp, the same peaks set to be peaked the same way. “The Roof” growls, its feedback spools from riffs inspired by scabs and bloodclots, as does “Hurrah,” but with a haughtier vigor, and “Gone Again,” but with organ and backwards tape reel effects. “Cadence” finds the organ again, discovers a surprisingly lilting melody, and caterwauls about someone “going away.” Like it’s happening again, like it’s happened again, like bro just sang about it.

Each time the album flips over, or a song rearranges its innards like a grifter’s ball-and-cup flim flam, Where the Messengers Meet again points to the band’s name, screaming, “See!” Mt. St. Helens Vietnam Band is the name of a band that looks to war casualties and admits that that’s how war is, that’s what volcanoes do, that’s post-rock for you. Music is just made of individually chaotic pieces put together well, but not well enough to stifle their burning need to return to chaos. That’s just how music rolls.

And each time the album so overtly flips over, the same brief blushes of goosebumps, the same visceral highs, the same infectious, clapping percussion: I straight up have a crush on this album. Maybe it’s the confidence—how “George Clark seemingly goes nowhere but suddenly fills the room—and perhaps it’s the swagger—“Leaving Trails”—but I am absolutely tickled by how improbably good this album continues to be. I know it won’t last, that Where the Messengers Meet is about as far as this band’s particular method can go, that all the climaxes will begin to sound obligatory, the wailing perfunctory, come their sophomore effort. I know that the mixing’s pretty static; I know that the timing of my affair seems a bit like an apology for their Pitchfork review; I know that my support for them is supporting a whole family, and I know I probably feel guilty about that, somewhere inside. But for now I’m satisfied. Which is about as good as puppy love can get.