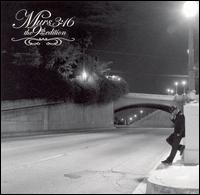 What is it about Murs that just doesn't work? There's something there that justifies no one liking this guy, and there certainly seem to be plenty of reasons. Is it the horrible pop culture references (friendster, iTunes, Anthony Kiedis, Old School)? The strange disconnect that becomes apparent when Murs goes from rapping about how he's "more Coldplay than I am Ice T" (a particularly bad line from "The Pain") to the far-too-graphic sexual descriptions of "Freak These Tales"? The old-school gangster style and golden era beats on an album from Def Jux?

The really sad thing is that when Murs is on, he's able to spit some terrific, clever lines, and when that side of his music comes through Murs 3:16 is quite impressive. His rapping is remarkable in some aspects, especially in that most of the tracks here are fully realized story raps, most notably the standout "Walk Like a Man." Unfortunately, while this still beats the massively disappointing The End of the Beginning, it still isn't nearly the album one would think Murs and 9th Wonder would be able to achieve.

This brings me to my second introductory point: 9th Wonder. Everyone out there who finds Kanye West and his troupe of chipmunks annoying may have a very hard time with the production on this album. For a Def Jux album the beats are very old school (9th is, of course, using Fruity Loops so you can't expect much more than that) but also not horribly creative. While they generally work well for Murs's style, they rely on very similar sampling, especially "Bad Man!" and "3:16," which seem to be based on identical female samples. The use of old black-soul samples made this about as close as anything I've heard to a Moby-produced hip hop album. The beats get repetitive fast and detract from overall enjoyment of the album.

Generally it's when Murs pulls his mind out of the gutter and gets focused on a story that the album shines. Even on other tracks he's able to drop a number of good lines ("not a revolutionary/nothing but the truth I carry/change if you wanna change/that karma is for you to carry"). "Bad Man!" and "3:16" really do run into each other, partially due to the similar production and largely because of the gangster ideals of both tracks-the first focuses on women and the second on ghetto violence.

"The Pain" rides a slower beat and lets Murs spit about his difficulties with women. While this track sounds horribly insincere, Murs manages to drop a few decent lines ("Cause they come and they go/ And even if they don't come/ They still hafta go"). The short "Trevor An' Them" works as one of the best story raps, recounting the story of a 7-11 robbery that Murs witnesses and then becomes an accessory to. Even the clipped, funk groove of the beat stands apart from the rest of the tracks on the album, and it's a shame the song wasn't more fleshed out.

"Freak These Tales" is the song you don't bring home to your mother-not only because it's just Murs rapping explicitly about his sexual exploits but also because your mother would be bored by the beat we've already heard twice before. "H-U-S-T-L-E" rides a somewhat more imaginative beat and at least Murs is able to make the subject matter interesting.

"Walk Like a Man" is the clear standout from this album -- Murs throws down his best, most inner-looking story rap and 9th Wonder manages to come up with three (reasonable) beats to use on the track. The song recounts the murder of Murs's best friend and Murs taking revenge on the killer, and goes beyond simple gangster thinking and looks more at Murs reactions to the events and the thinking behind his actions. Neither of the other two tracks on the album live up to "Walk Like a Man," especially 9th Wonder collaborator Phonte on "Animal."

Overall this album won't much help Murs's reputation. Even when Murs raps of racial injustice and his fan base on "And this is for…" one wonders how much of a fan base is really out there. If Murs were to deliver a consistent product, he would definitely deserve praise, since he certainly has the skills but just hasn't yet been able to make a fully realized album. As is, Murs 3:16, coming in at a mere 35 minutes and four or five decent tracks, hardly registers as a step in the right direction.