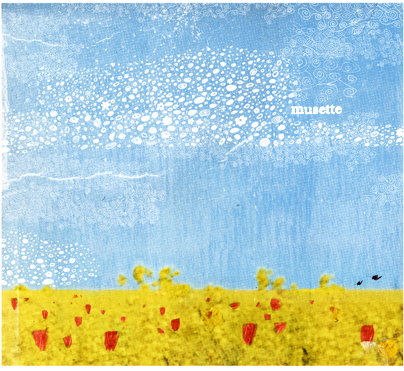 With the marker buoy for summer now finally in sight (that’s it just there, past the freezing fog and drizzle), what better way to appreciate the greenery than with a record that’s as blessed out as an apple blossom? And from Sweden, too: home of existential shoegaze, speed-metal, and porn, if you’re one to subscribe to your stereotypes. Fortunately, with Musette, the newly-founded Tona Serenad label are adding a new kind of stripe to the flag: a hypnotic six-strong folk act who push a cappella whistling to perfection. Now, some folk can’t stand whistling, I know, and to those I say either look away now or open your ears and keep quiet. Datum, the first offering from both band and label alike, is a collection of fourteen pauses, fourteen instances when Mr. Musette sat down and sketched a nice little ditty of the world—what a wonderful world, as Old Louie might say. How nice it is here in this sealed glade.

That’s how Datum works, see—it drops you into a sunny copse and lets nature take control, accordion traces flirting with birdsong. The dates Musette references as track titles could just as well be written in the lunar calendar; these are headstates, the effect of the whole creating a gypsy haze that the South of France tour board could rent bikes to. Imagine Jules et Jim (1962) at their showboating best: babbling riverbanks, picnic chill, and a fleeting feel of contentment. And when the songwriting itself comes into focus, it’s a lot less flaky than you might think. On “10 Juli” you can hear the ghost of Weezer’s “Undone” being slowly rewoven into a poloneck, and if you make it to “1 Februai” you’ll see the Dirty Three fooling on a rope-swing. With those two bands as reference points for your attitude and patience longitudes, you only plot a fine line in crayon and Datum will slowly reveal itself as a record of deep impressions. Number of off-the-top-of-your-head contenders you can think are producing similar shit: I’ll buy you lunch if you can get to more than five. Certainly none that are living today, that’s for sure, existing outside of scratchy pre-Felix animation. Musette deserves credit for that alone, plus the fact that it’s happy whistling bliss while the world’s computer networks are ultra busy getting jammed with a backlog of zeroes.

The only gripe in the case against Datum is that, like tai chi or professional whittling, you need to slow down in order to appreciate it. At first, all that mellow loafing can feel like one giant podcast—one without room for health anxiety. I suppose there’s a twinge of discernible sadness on “22 December” with its calm reflections of continental Americana (someone anticipating coal in three days, perhaps?), and the breezes and white keys of “24 Januari” sit well with winter restaurants. But then the rosy whistling kicks in, and suddenly your troubles are left clinging by their fingertips. He never misses a note, the whistler, but for God’s sake don’t ever take him bird-watching. You’re likely to attract a frenzy of tits and get shat on till you’re 50% muesli.

Ace Ventura jokes aside, Datum is a tiny triumph in its private meadow and one you should at least dip into (you can, courtesy of the Tona Serenad webshop where they’re offering the demos for free). I love how nothing disturbs its quiet pootle, and to the gimlet-eyed director there’s a feast of potential slasher soundtrack irony lurking in the hippy strains. At forty minutes of accordions plus air, strings, and pianos, it’s a bit of a slow-bike race and perhaps might work better being revised into a tight-as-fuck EP over a full length. Work better in terms of sales, that is—personally I can think of a lot worse places I could drift off to for forty minutes, and getting shat on by tits certainly isn’t one of them. Can you remember how to make a blade of grass whistle? No? Sit still, and this record will teach you.