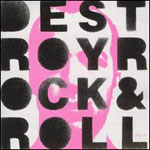 The music world, independent and otherwise, needs guys like Mylo. A number of smart indie critics have acknowledged, to the exclusion of your typical sanctimonious and peevish indie inclination to harshly judge mainstream-sounding electronica, that this album is just plain enjoyable. It’s not Mu, and hey, thanks for that, Mylo. ‘Cuz Mu’s stuff is irritatingly in love with its own freakishness. So many artists are in love with their own “indie” preciousness – and consequently gain reciprocal love from indie critics almost automatically – while Destroy Rock and Roll’s undeniable mainstream appeal and production sheen would in and of themselves be reasons for those same critics to haughtily gag.

So it’s refreshing to see that a number of these critics have hit implicitly on the idea that love for the challenging, the avant-garde, the “unique,” shouldn’t push love for the just-downright-fun off the seat. If they don’t clearly state the point, I will: the “shallow” electronic music that we so often ignore not only shouldn’t be so automatically written off, but should be given room for embrace, since – in line with my argument in my Franz Ferdinand review – being deep and meaningful all the time can be a fucking bore. Reviews like one critic’s derisive attack on Basement Jaxx’s Rooty illustrate the problem of importing an expectation of deep indie meaningfulness into the experience of all music, closing the book on the album with the nearly shocking slap: “This shit is no laughing matter.” I mean, come on, dude. What imperative for seriousness should be applied to a track like “Romeo”? Revelation on the dancefloor required? Deep melodic impact necessary? I mean, sure, if someone can conjure up a wickedly thoughtful and danceable techno record (Discovery being among the precious few), it’ll certainly get a higher rating from me than Mylo will, but in the meantime why hate on an album as simply pleasurable as Destroy Rock and Roll?

I’m sure some readers out there are just waiting to call me on my shit, because I wrote an article that supposedly demands a purely technical criteria for evaluating music (wrong, read it again). One angry message board skewered me for my review of Oceans Apart, thinking I was just some elitist asshole because I found its favorite band totally boring, and concluded that I could only love the avant-garde (which would explain my love for Permission to Land or Royskopp’s music in general?). But as with any music form, context matters. You don’t go to jazz for orderly progressions, and you don’t go to classical music for improvisation. In the same vein, I doubt you can show me very much actually dance-floor-worthy music that intellectually astounds or technically excels beyond a certain limit. The reason you can dance to it has to do with the fact that it is, after all, built around a simple beat. Unless, that is, you get a kick out of grooving to polyrhythm or off time signatures.

So what you should go to Destroy Rock and Roll for is highly enjoyable, competent, reasonably inventive, energetic techno. The album’s few lyrics will not change your life. None of the album will blow your mind. But it’s been in the UK for a year now, and they’ve had the good sense to just shake the junk and enjoy it. And so should you. The nice thing is that you can start with just about any track on the album, given its assured consistency.

“In My Arms” interlocks several synthetic patterns around its handclap-assisted beat to churn out a throbbing club anthem just waiting to be picked up by a Ministry of Sound comp – wait, they did pick it up for 2006. “Drop the Pressure,” with a classic vocoder build, swooning background synths, and a great hook, was already a superior inclusion on the generally lackluster 2005 comp. The blithe opening cut-ups of “Rikki” find a backbone in a fat-assed bass line, to be repackaged in several synthetic settings by the end of the song’s brief hip-unleashing duration. “Muscle Cars (Reform Reprise)” delivers awesomely terrible lyrics, “Well oiled / That’s what you are / Come on / And ride / In my muscle car,” but brings in some guitar sampling and an ebullient set of “WOOooOOOooOOOooos” into the picture, and in the process becomes hopelessly winning.

Destroy Rock and Roll’s flaws do stand out when the booty stops moving; “Need You Tonite” mixes a tepid beat with a rote bassline and too much atmospheric synth-wash, “Sunworshipper”’s Royksopp rip-off is nagged by its dull spoken word accompaniment, and on the off occasion Mylo goes on MoS auto-pilot. And sure, his album title isn’t borne out by his music in any meaningful manner. But these complaints aren’t even remotely damaging enough to sink a ship that’s predominantly buoyant and bright. And if you’re still not convinced that this brand of mainstream techno could or should hold a place in a respectable music-lover’s heart? Well, then Mylo’s material won’t be playing at your next party. But it will be playing at mine. And I’d be willing to bet you that it’d make my party the one that had everyone grinning and exhausted the next morning.